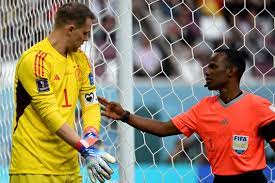 A handful of Qataris wore armbands featuring a pro-Palestinian design at the Japan-Germany World Cup match on Wednesday, according to photos posted on Twitter, amid a row over political symbols that are permitted at soccer’s main event.

The armbands bore the black-and-white design of the keffiyeh scarf that is synonymous with the Palestinian cause and were an apparent response to players and officials protesting FIFA’s move to sanction players who wear the “OneLove” arm-band on the pitch.

Last week, seven European teams abandoned plans to wear the armband onto the pitch after FIFA threatened them with sanctions.

Ahead of the kickoff on Wednesday, Germany’s players placed their hands over their mouths during a team photo in protest of the move by world soccer’s.

Japan went on to defeat Germany 2-1.

Qatari officials have appeared increasingly vexed by what they see as unfair criticism of the decision to award Qatar World Cup hosting rights, especially by German officials including Faeser.

The World Cup, the first to be held in a Middle Eastern country, has focused a spotlight on LGBT+ rights in Qatar, where homosexuality remains illegal but some queer residents say they have more freedoms than their peers across the region.

A few highly publicised incidents of security officials preventing ticketholders wearing pro-LGBT+ rainbow designs from entering World Cup stadiums added fuel to the debate over which political symbols are permitted at the games.

The tournament has also buoyed pro-Palestinian sentiments among some locals, especially in response to the Qatari government’s decision to allow direct flights from Tel Aviv for the World Cup as well as a delegation of Israeli diplomats to handle logistics.

An estimated 10,000 to 20,000 Israeli fans are expected to visit Qatar during the month-long tournament.

Israelis are usually prevented from visiting Qatar, which does not officially recognise Israel, setting Palestinian statehood as a condition for recognition.