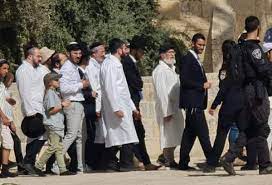 At least 94 settlers entered the Mosque in different groups through its Maghariba Gate and toured its courtyards under tight police protection.

The rabbis have reportedly given speeches on alleged temple mount and a number of them provocatively performed Talmudic prayers during the raid on the holy mosque.

Meanwhile, the Israeli police have also imposed movement restrictions on Muslim worshipers at the Aqsa Mosque’s entrances and gates.

This is while the Aqsa Mosque is exposed to daily desecration by Jewish settlers and police forces in the morning and the afternoon.

The Israeli police close al-Maghariba Gate, which is used by Jews to enter the Mosque, at 10:30 am after the settlers complete their morning tours at the holy site. Later in the afternoon, the same gate is reopened for evening tours by settlers.

During the presence of settlers inside the Mosque compound, entry restrictions are imposed on Muslim worshipers at the entrances leading to the Mosque and their IDs could be seized until they leave the holy place.

Ten signs the oil industry is bent out of shape