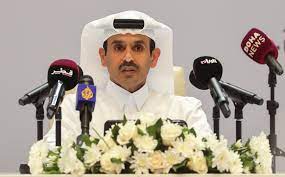 QatarEnergy CEO and state minister for energy Saad al-Kaabi said on Thursday that skyrocketing energy prices are “weighing painfully” on the global economy, dampening support for the transition to green energy.

“Many countries particularly in Europe which had been strong advocates of green energy and carbon-free future have made a sudden and sharp U-turn. Today, coal burning is once again on the rise reaching its highest levels since 2014.”

Governments across Europe have ploughed hundreds of billions of euros into tax cuts, handouts and subsidies to tackle the continent’s worst energy crisis in decades that is driving up inflation, forcing industries to shut production and hiking bills ahead of winter.

Kaabi stressed the need to invest in cleaner and renewable energies, including natural gas, to drive capacity and baseload capabilities.

“The lack of such investment is putting a heavy burden on both producers and consumers. Producers must find supplies that may not exist due to the lack of investment,” he said at the online LNG Producer-Consumer Conference 2022 being hosted in Tokyo.

Earlier this month, the head of Saudi oil giant Aramco (2222.SE) echoed the same view, saying that continuing underinvestment in hydrocarbons at a time when fossil fuel alternatives were still not readily available was the root cause of the problem.

QatarEnergy, one of the world’s largest LNG producers, is investing nearly $30 billion on the Gulf state’s North Field East expansion, which will increase Qatar’s liquefaction capacity to 126 million tonnes per annum (mtpa) from 77 mtpa by 2027.

Germany has leased four floating storage and regasification units (FSRUs) that are capable of importing at least 5 billion cubic metres (bcm) of seaborne gas per year. It will also charter a fifth floating LNG terminal for winter 2023/24.