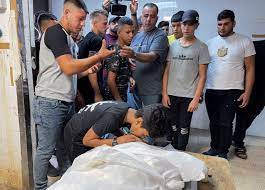 Israeli forces killed a Palestinian in predawn clashes in the occupied West Bank city of Nablus on Thursday, Palestinian medics said. The Israeli army said he was armed and shooting at soldiers; the Palestinians denied this.

Witnesses said the clashes erupted when Israeli forces arrived to guard Jewish worshippers visiting Joseph’s Tomb, a Jewish shrine that has been a flashpoint in the Israeli-Palestinian conflict.

Later in the day, in a separate development, Israeli security forces raided seven non-governmental organisations in the West Bank, confiscating computers and equipment before sealing off the entrances, Palestinian witnesses and officials said.

This followed a decision by Israel to designate six of the groups as terrorist organisations, accusing them of funnelling donor aid to Palestinian militants The designation, which has drawn criticism from the United Nations and human rights watchdogs, was ratified on Wednesday for three of them.

Nine European Union countries have said they will continue working with the groups, citing a lack of evidence for the Israeli accusation.

Israeli Defence Minister Benny Gantz reiterated Israel’s position that the organisations had operated undercover to serve the Popular Front for the Liberation of Palestine (PFLP), which has carried out deadly attacks on Israelis and which the United States and the EU regard as a terrorist organisation.

“They also assist in raising funds for the terrorist organisation via a variety of methods that include forgery and fraud,” Gantz said.

Palestinian Prime Minister Mohammad Shtayyeh visited the office of Al-Haq, one of the rights groups that was shuttered in the city of Ramallah, saying his cabinet did not recognize the Israeli closures and telling officials at the NGOs to resume work immediately.

“We don’t deal with the occupation measures. Those are legal institutions, that work under the law,” Shtayyeh told reporters.

Shtayyeh said Israeli forces smashed the gate of the nearby St. Andrews Episcopal Church and broke into it, during their raid into Al-Haq offices. There was no immediate comment from the Israeli army on this.

Hussein Al-Sheikh, a senior official in the Palestinian Authority, said on Twitter that the “storming of civil work institutions … is a dangerous escalation and is an attempt to silence the voice of truth and justice”.

“We will appeal to all official international bodies and human rights institutions to intervene immediately to condemn this occupier behaviour and place pressure on them to reopen the institutions and to be able to exercise their activities freely,” Sheikh said.