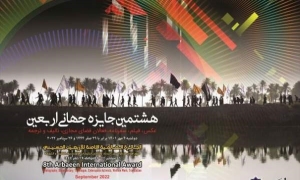 Hussein (AS) and the Battle of Karbala.

The international cultural event has issued announcement to call on pilgrims visiting the holy city of Karbala for Arbaeen to send their photos, videos, travelogues, writings and other artistic works with the theme of the occasion marking forty days after martyrdom of the third Shia Imam, reported Taqrib News Agency (TNA).

Iran’s Organization of Culture and Islamic Relations has launched the cultural award for the pilgrims visiting the holy shrine of Imam Hussein (AS) and those attending the Arbaeen march in a bid to promote the notion of resistance and Ashura.

The first round of the ceremony was held in 2014 only for the photographers though the warm welcome for the event led the executives to add other artistic fields to the annual cultural event.

Arbaeen 2022 will be marked on September 17 and those interested in participating the event are recommended to send their works regarding Arbaeen until 22 September.

The activities of the Forum themed: “Common Values