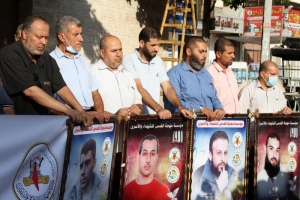 Some 75 Palestinian freedom fighters incarcerated in Israel for their resistance of the occupation started today an open hunger strike in solidary with the two striking administrative detainees Khalil Awawda and Raed Rayyan.

Khalil Awawdeh, 40, from the town of Idna in the southern West Bank district of Hebron, has been on hunger strike for 23 days in protest of his prolonged administrative detention without charge or trial.

Last month, Awawdeh broke a 111-day fast after being reassured by Israeli prison authorities that his administrative detention will not be renewed, but he resumed the hunger strike a week later after the occupation authorities reneged on their promise not to end his unfair detention order.

Israel’s widely condemned policy of administrative detention allows the detention of Palestinians without charge or trial for renewable intervals usually ranging between three and six months based on undisclosed evidence that even a detainee’s lawyer is barred from viewing.

Currently, Israel is holding over 680 Palestinians in administrative detention, deemed illegal by international law, most of them former prisoners who spent years in prison for their resistance of the Israeli occupation.