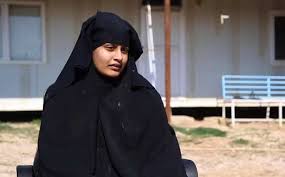 A UK-born woman who went to Syria as a schoolgirl to join Islamic State should not be allowed to return to Britain to challenge the government taking away her citizenship, because she poses a security risk, Britain’s Supreme Court ruled on Friday.

Shamima Begum left London in 2015 when she was 15 and went to Syria via Turkey with two school friends. While there, she married an Islamic State fighter. She gave birth to three children, all of whom died as infants, and is now being held in a detention camp in Syria.

She was stripped her of her British citizenship in 2019 on national security grounds.

Friday’s unanimous Supreme Court ruling overturned a decision by the Court of Appeal last year, which had held that she must be allowed to return so that she can have a fair appeal against the citizenship decision.

“The right to a fair hearing does not trump all other considerations, such as the safety of the public,” said Robert Reed, the President of the Supreme Court. “If a vital public interest makes it impossible for a case to be fairly heard, then the courts cannot ordinarily hear it.”

Begum’s case has been the subject of a heated debate in Britain, pitting those who say she forsook her right to citizenship by travelling to join the militants against those who argue she should not be left stateless.

Human rights groups said Britain had a duty to bring back Begum and others in similar straits, and prosecute them for any crimes they may have committed, rather than leaving them abroad.

“Abandoning them in a legal black hole – in Guantanamo-like conditions – is out of step with British values and the interests of justice and security,” said Maya Foa, director of campaign group Reprieve.

After travelling to Syria, she lived in Raqqa, the capital of Islamic State’s self-declared caliphate, where she remained for four years until she was discovered in a detention camp.

She is now in the Roj camp, run by Syrian Kurdish authorities, where the U.N. rights experts said this month conditions were “sub-human”.

Reed said Begum’s appeal of the citizenship decision should be put on hold until she was in a position to play an effective part in the case without endangering the public.

“That is not a perfect solution, as it is not known how long it may be before that is possible. But there is no perfect solution to a dilemma of the present kind,” he said.