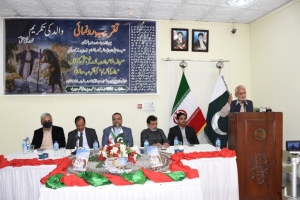 Culture Center of Islamic Republic of Iran in Pakistan has held a ceremony to celebrate the birth anniversary of Imam Ali (AS) and Father’s Day with the presence of cultural figures, academics and religious thinkers.

On the happy occasion a book titled “Honoring the Father” in Urdu was launched by the Iranian Culture Center in Islamabad with the aim of promoting religious and cultural teachings.

The ceremony was held in the meeting hall of Khana-e-Farhang Rawalpindi and was participated by scholars, poets, Persian lovers and university professors.

Ehsan Khazaei, Cultural Counselor of the Islamic Republic of Iran in Pakistan while congratulating the birthday of the pious Imam Ali (as) said the poems of every poet should awaken the people just like the poems of Iqbal.

He further added if there is no poet or writer in the society then it means the society is empty and soulless.

He congratulated Mohammad Rafiq Mughal, author of the book “Honoring the Father” on publication of his work.

Ehsan Khazaei added this book has been compiled using verses, narrations and hadiths of Imams (AS) with a fluent and beautiful writing style and has enhanced the literary stature of Mr. Mughal.

The author of the book “Honoring the Father” while praising the Cultural Center of Iran for holding this ceremony said:  At the beginning of this book, I presented poems in praise of the Holy Prophet (PBUH) and Ahl al-Bayt (AS) and I believe this collection of poems will promote religious teachings in a very effective manner to the younger generation of Pakistan.

Mohammad Rafiq Mughal is a prominent Pakistani poet and one of the lovers of Ahl al-Bayt (AS) who has published various books, including; Paradise under the feet of mothers, Imam Reza (AS) and Mashhad, Nasim Karbala, exemplary mothers of the Islamic world, Golestan Reza (AS).

Since its establishment on 18 April 1982 under