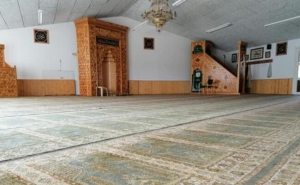 walls, an official at the facility said .

Hursit Tokay, the president of the mosque association, told Anadolu Agency that he left the Aabenraa Mosque on Friday at 6 p.m.

When he arrived around 11 a.m. Saturday, he noticed insulting writings about the holy book of Islam on the wall.

The mosque, which operates under the umbrella of the Danish Turkish Islamic Foundation, was partially closed due to the coronavirus pandemic.

He said mosque officials reported the incident to police and authorities opened an investigation and would examine surveillance cameras in the area.

Tokay condemned the attack and said the writings were erased and no other damage was detected to the mosque.