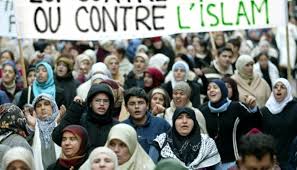 nation’s president as the fight against Islamist separatism.

The bill was introduced Oct. 2 by Emmanuel Macron to fight so-called “Islamist separatism.”

Interior Minister Gerald Darmanin said on Twitter that the draft law, which advocates consolidating principles of the republic, was widely accepted by the special commission.

Darmanin said that France is making a law for the future, not only to resist today’s difficulties but to defend the values of the republic.

He also said that rising far-right and leftist structures in the country are also a threat.

Three organizations of the French Council of Muslim Worship (CFCM) unilaterally denounced the “charter of principles” of Islam on Thursday that reaffirms the compatibility of the faith with France.

– The bill putting Muslims under ‘blockade’

The bill is expected to be submitted to the National Assembly in February. The draft law is being criticized because it targets the Muslim community and imposes restrictions on almost every aspect of their lives.

It provides for intervening in mosques and the associations responsible for the administration of mosques, as well as controlling the finances of associations and non-governmental organizations belonging to Muslims.

A 2004 law prohibits the wearing or open display of religious symbols in French schools, but it does not apply to universities.

The bill, which prohibits patients from choosing doctors based on gender for religious or other reasons, paves the way for the evaluation and suppression of dissenting views under the name of “posts that incite hatred” with a new mechanism. The bill also requires “secularism education” for all public officials.

Three French Muslim organizations have condemned the recent “charter of principles” of Islam pushed by President Emmanuel Macron stressing that some statements in the charter are “prejudicial to the honor of Muslims.”

“We believe that certain passages and formulations in the text submitted are likely to weaken the bonds of trust between the Muslims of France and the nation,” said the three groups — which make up the nine-member French Council of the Muslim Faith (CFCM).

“Furthermore, some statements are prejudicial to the honor of Muslims, with an accusatory and marginalizing tone,” they added in a Friday statement, referring to the text of a so-called anti-extremism charter pushed by the country’s President Emmanuel Macron.

Macron has enraged Muslims world-wide by publicly supporting publication of a derogatory image of Islam’s Prophet Mohammad (PBUH) and describing the Abrahamic faith of nearly 1.8 billion people as a “religion in crisis.”

“We obviously agree with the demand for non-interference by States, the non-instrumentalization of religions and respect for the Constitution and the principles of the Republic,” the joint statement added.

Only five out of nine groups that make up the CFCM, a body set up nearly 20 years ago to supposedly enable dialogue between the French government and the country’s large Muslim community, have signed up to the charter after weeks of internal disputes and occasionally bitter debates.

The three institutions — the Coordination Committee of Turkish Muslims in France (CCMTF), the Millî Görüş Islamic Confederation (CMIG) and the Faith and Practice movement — declared on Wednesday that they decided against signing the charter that was approved and submitted to Macron.

They said it was approved without obtaining the full consensus of other integral components of the CFCM, including the regional and departmental councils and imams who will be impacted by the decision.

In a complaint to the UNHRC, nearly 36 groups from 13 countries outlined the “clear violation of a number of basic rights that are protected in legislation that is ratified by Paris.”

The signatories of the 28-page complaint included the Strasbourg-based European Muslim Initiative for Social Cohesion, the Muslim Association of Britain and the US-based Council on American-Islamic Relations (CAIR).

The document cited the anti-Islam remarks by Macron, including his October 2020 speech in which he defended the republication of blasphemous cartoons of Prophet Muhammad (PBUH) by the French weekly Charlie Hebdo.

The speech sparked protests across the world and called for the boycott of French goods.

It said such a stance “goes beyond the permissible limits of an objective debate” and “could stir up prejudice and put at risk religious peace,” citing the UN Human Rights Committee’s own comments on depictions of Islam’s Prophet.

The groups also said the French government exploited the murder of a school teacher that followed the speech “for racist and Islamophobic purposes,” including the raiding of several Muslim homes and organizations.

Meanwhile, the approval of the Macron-backed charter — dictating how Muslims in France should practice their faith — would pave the way for the establishment of the National Council of Imams that will have powers to authorize and shape the practices of imams across the French Muslim communities.

The council will also control and restrict the entry of imams from Turkey, Tunisia, Morocco and Algeria, and 300 imams may be expelled, according to reports published by France’s mainstream media outlets.

The joint statement further noted that the Great Mosque of Saint Denis de la Reunion, which is one of the founding components of the CFCM, has also refused to sign the charter.

They further demanded amendments to the text of the 10-point charter that the French president boasted as a “foundational text for relations between the State, Islam and France,” as part of his purported efforts to safeguard the country’s secular system in wake of violent incidents sparked by repeated publication of cartoons depicting the prophet of Islam.

The dissenting Muslim groups also underlined that although they are convinced that the imam’s council is beneficial, it should derive its legitimacy from the Muslim population. They further emphasized the need for “a broad, democratic and participatory consultation” instead of customarily signing the text that the “community cannot calmly accept.”

Meanwhile, the complaint to the UNHRC also accused France of acting “out of proportion” and “unreasonably” applying exceptions to restrictions on fundamental freedoms in order to protect national security.

It pointed out that there was no effective remedy within the French legal system to stop structural Islamophobia, and therefore a formal infringement procedure against the government was necessary.

“As a signatory to the UN, France cannot be allowed to infringe upon its international rights obligations so openly, and yet present itself as the land of ‘liberte, egalite, fraternite’.”