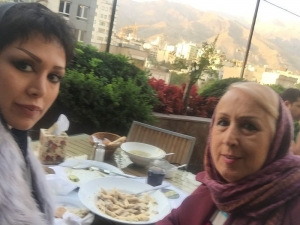 On Tuesday night, on the eve of President Joe Biden’s inauguration, Mania Darbani’s mother called her from Iran.

She was ecstatic that Biden would soon repeal the Trump administration’s so-called “Muslim ban” that barred people from a number of mostly Muslim-majority nations, including Iran, from coming to the United States.

“It means I can get to you very soon,” Maryam Taghdissi Jani, who is applying for an immigrant visa, told Darbani, a 36-year-old receptionist who lives with her husband in Los Angeles.

Darbani said she could not bring herself to explain that other roadblocks remained in place before her mother could join her. On top of the original travel ban that kept them apart for years, Trump issued another ban in 2020 that blocked certain immigrant visas because of the coronavirus pandemic.

Darbani, a U.S. citizen, petitioned for an immigrant visa for her mother, a 71-year old nurse, in 2019, but the Trump administration stopped issuing almost all new family-based green cards in April 2020, saying the move would protect American jobs amid the coronavirus pandemic.

Biden has not yet said whether he will rescind the proclamation, but until he does, Taghdissi Jani will remain in Iran.

“I am very sad right now, I am just waiting for her,” Darbani said. “My father passed away and my mom is alone. I need her here.”

Since December 2017, after a revised version of the original travel ban was upheld by the U.S. Supreme Court, some 40,000 people have been barred from entering the United States under the ban, according to State Department data.

But for many families separated by the travel ban a reunion isn’t on the cards anytime soon due to layers of pandemic-related travel and visa restrictions.

On Jan. 18, Biden press secretary Jen Psaki said the incoming administration would reject a Trump attempt to lift a restriction on travelers from Europe and Brazil. She added that the Biden administration planned to “strengthen public health measures around international travel.”

The Biden administration did not immediately respond to a request for comment about whether he plans to lift the immigration bans.

Curtis Morrison, an immigration attorney representing more than 5,000 people in lawsuits challenging the coronavirus-related immigration bans, has been advising clients for weeks that Biden’s rescission of the travel ban will not change the broader freeze on travel.

“It’s a positive development, but we can’t really celebrate yet,” he said.

Lameaa Albarmaki, 25, a Yemeni green card holder who immigrated to the United States in 2015 as the war in her country intensified, is waiting to be reunited with her husband.

She lives with her young daughter, parents and four younger siblings in Baltimore. Her daughter, as well as three of her siblings are developmentally disabled, she said, and she needs help. “I need him to just be with me,” she said. “That’s all I need and I hope.”

Some immigrants who have been waiting for years for the chance to reunite with their loved ones are now having to weigh the risks of traveling during a pandemic.

Aryan Jafari, whose parents missed milestones such as his engagement and the birth of his baby due to the travel ban, said he got emotional after the presidential election in November, when it became clear the travel ban would be repealed.

The 31-year-old mechanical design engineer called his parents in Iran and told them they would soon be able to visit and meet their first grandchild.

But on Wednesday, he said, the family was not “jumping up and down” even as the ban was officially revoked.

He does not think it is safe for his parents, aged 59 and 67, to get on a plane and travel to Los Angeles, a COVID-19 hotspot, without a vaccination.

“Right now we are just looking forward to the day when it is safe enough for people to travel,” he said. “We don’t want it to be their last trip, we want it to be safe for everyone.”