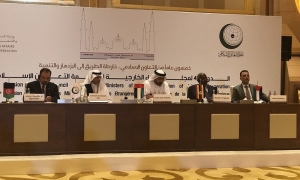 “All 57-Muslim countries stood behind us and adopted a resolution against the human rights violation and Indian government’s actions of Aug. 5, 2019, to revoke the special status of Indian Illegally Occupied Jammu and Kashmir [IIOJK]” Shah Mehmood Qureshi said in a statement.

“India tried its best not to raise the Kashmir issue at the meeting in Niamey but failed.”

The 47th session of the OIC Council of Foreign Ministers took place in Niger’s capital Niamey on Nov. 27-28.

Kashmir, a disputed territory, is partly held by India and Pakistan but claimed by both in full.

On Aug. 5, 2019, New Delhi revoked Article 370 and other related provisions from its Constitution, scrapping the country’s only Muslim-majority state with its autonomy. It was also split into two federally administered territories.

Qureshi, in his statement at the OIC summit, said Muslims were being “systematically” targeted and discriminated against in India.

On the situation in the Himalayan valley, he said: “For over 15 months now, over 8 million Kashmiris continue to face lockdown, military siege, communications blockade, arbitrary detentions, and unprecedented restrictions. The entire occupied territory has turned into the world’s largest open-air prison.”

New Delhi changed the demographic structure of Kashmir through changes in domicile and property laws, he added.

The foreign minister thanked his counterparts from Turkey, Saudi Arabia, and Niger who spoke and highlighted the Kashmir issue during their statements in the Opening Plenary Session.

The OIC in its unanimous resolution reaffirmed its strong support for the Kashmir cause, and rejected India’s “illegal and unilateral actions,” according to Pakistan’s Foreign Ministry.

“The Resolution demands that India ‘cancel the issuance of domicile certificates to non-Kashmiris’ as well as other unilateral and illegal actions, including ‘Jammu Kashmir Reorganization Order 2020’, ‘Jammu Kashmir Grant of Domicile Certificate Rules 2020’, ‘Jammu and Kashmir Language Bill 2020’ and amendments to the land ownership laws,” it quoted the resolution as saying.

The OIC, it said, also condemned human rights violations, extra-judicial killings during fake encounters and search-and-cordon operations, and the demolition of homes by Indian forces in Kashmir.

The Culture and Islamic Relations Organization in Iran