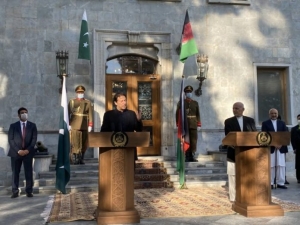 Pakistan and Afghanistan on Thursday agreed to pace up their joint efforts to reduce recent spate of terrorist incidents in Afghanistan through close coordination and intelligence sharing.

Imran Khan, who arrived in the Afghan capital on his maiden visit to the neighbouring country, held talks with President Ghani, that focused on deepening of bilateral ties, Intra-Afghan peace process and regional economic development.

Prime Minister Khan assured the Afghan government of Pakistan’s unflinching support and cooperation to end violence in Afghanistan including a ceasefire.

“Let us know where we can help you. We assure you that we will be there to help reduce slur of violence in your country,” the Prime Minister told the Afghan president, as the two spoke before the local and international media.

Imran Khan expressed concern over the increasing level of violence in Afghanistan and supported the idea of establishment of committees from the two governments to hold mutual discussions.

Prime Minister Imran Khan thanked President Ghani for extending an invitation to visit Afghanistan, expressing confidence that it would lead to further strengthening of ties between the two countries.

He said Pakistan and Afghanistan enjoyed historic links and brotherly relations and recalled that during the era of 70s, Kabul and Peshawar were the favourite destinations for the visitors from both sides.

Imran Khan regretted that the people of Afghanistan unfortunately suffered violence for four decades and said Pakistan was most concerned about the situation due to the fallout of situation in its own tribal areas.

“My visit at this particular time has a message that Pakistan wants peace in Afghanistan,” he said.

The Prime Minister said peace and connectivity was the best way to ensure prosperity of Pakistan, Afghanistan and also the entire region.

He said close cooperation between the committees from both sides and intelligence agencies would lead towards finding effective solutions for peace and stability.

He said Pakistan played a consistent role in Intra-Afghan dialogue and noticed with concern the increasing level of violence despite the Qatar peace deal inked between the United States and Taliban in Doha, Qatar this February.

“Now again to build trust, we will help the Afghan government to meet their expectations,” he said.

Earlier, President Ashraf Ghani welcomed the Prime Minister, saying the visit was a “step to strengthen faith and cooperation”.

“Our common focus will be poverty eradication and empowerment of our countries,” Ghani told the media persons on the occasion.

He said enduring peace within the framework of joint cooperation was important to lead towards a comprehensive ceasefire.

’All of us need to understand that violence is not an answer, but an inclusive politics,” he said.

With PM Imran Khan’s visit, Ghani said a “foundation of trust was established today” to continue the journey towards sustainable peace.

He announced to visit Pakistan in near future on the invitation of Prime Minister Khan.

The Afghan President mentioned that during his meeting with Imran Khan, the two sides agreed that respect for Prophet Muhammad (PBUH) was in the hearts and minds of every Muslim and stressed that the world must differentiate between the ‘negative comments’ from ‘freedom of expression’.