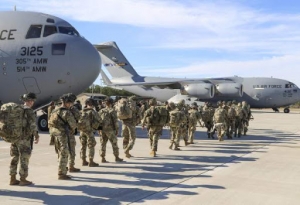 Major political party in Iraqi parliament has called for full withdrawal of the American forces from the Arab country.

Karim Alaiwi, a legislator from the Fatah (Conquest) alliance and a member of the Security and Defense Committee in the Iraqi legislature, told Arabic-language Baghdad Today news website on Thursday that his coalition and all other national factions seek complete pullout of all foreign forces, not just Americans, from the Iraqi soil.

Alaiwi described the Pentagon’s decision to reduce the number of US forces in Iraq as “unacceptable,” emphasizing that the Iraqi parliament’s resolution concerning withdrawal of US troops from the entire Iraqi territories, including the semi-autonomous Kurdistan region, is unambiguous and irreversible.

“Calls for the full withdrawal of all foreign troops from Iraq will continue and will even step up… Any cut in troop levels will not make us abandon our demands as they have been ratified by the parliament and enjoy both political and popular support,” the Iraqi lawmaker said.

Acting Secretary of Defense Christopher Miller announced on Tuesday that the US will withdraw thousands more US troops from Afghanistan and Iraq by January 15, 2021 – just days before President Donald Trump leaves office on January 20 and projected winner of US election Joe Biden takes office.

Miller said the withdrawal will leave approximately 2,500 troops in Afghanistan and roughly the same number in Iraq.

Currently, there are approximately 4,500 US troops in Afghanistan and 3,000 troops in Iraq.

Kata’a al-Rikabi, a member of the Security and Defense Committee in the Iraqi parliament, told Arabic-language al-Maalomah news agency on November 14 that the change in the US administration cannot impact the implementation of the resolution adopted by Iraq’s parliament concerning the withdrawal of US forces from the country.

“The Iraqi government must work out a schedule for the exit of US forces in coordination with the White House, no matter whether the incumbent administration (of President Donald Trump) is in office or Biden’s team,” he said then.

Anti-US sentiment has been running high in Iraq since the assassination of top Iranian anti-terror commander Lieutenant General Qassem Soleimani, the commander of the Quds Force of Iran’s Islamic Revolution Guards Corps (IRGC), and his Iraqi trenchmate Abu Mahdi al-Muhandis, the deputy head of the Popular Mobilization Units, along with their companions in a US terror drone strike authorized by Trump near Baghdad International Airport on January 3.

Iraqi lawmakers approved a bill two days later, demanding the withdrawal of all foreign military forces led by the United States from the country.