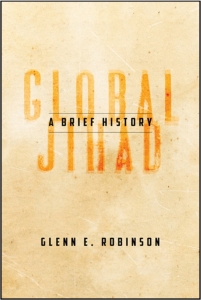 Most violent jihadi movements in the twentieth century focused on removing corrupt, repressive secular regimes throughout the Muslim world. But following the 1979 Soviet invasion of Afghanistan, a new form of jihadism emerged—global jihad—turning to the international arena as the primary locus of ideology and action. With this book, Glenn E. Robinson develops a compelling and provocative argument about this violent political movement’s evolution.

Global Jihad tells the story of four distinct jihadi waves, each with its own program for achieving a global end: whether a Jihadi International to liberate Muslim lands from foreign occupation; al-Qa’ida’s call to drive the United States out of the Muslim world; ISIS using “jihadi cool” to recruit followers; or leaderless efforts of stochastic terror to “keep the dream alive.” Robinson connects the rise of global jihad to other “movements of rage” such as the Nazi Brownshirts, White supremacists, Khmer Rouge, and Boko Haram. Ultimately, he shows that while global jihad has posed a low strategic threat, it has instigated an outsized reaction from the United States and other Western nations.

“Glenn Robinson makes a signal contribution to our understanding of the history and the essence of global jihad. This concise book delivers much more than its modest title promises, and renders comprehensible the causes of global jihad since the 1980s.”

“Glenn Robinson has produced a masterful book that is incisive, insightful, and comprehensive—a tour de force on the evolution of jihadism. For anyone interested in better understanding the contemporary politics of the Middle East and Islam, Global Jihad is essential reading.”

—Mehran Kamrava, author of Inside the Arab State

Glenn E. Robinson is on the faculty at the Naval Postgraduate School in Monterey, California, and is affiliated with the Center for Middle Eastern Studies at the University of California, Berkeley. He has served as an expert advisor to USAID and the US Department of Defense.