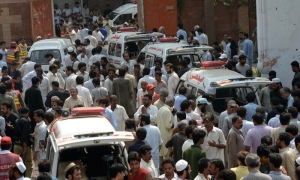 At least seven people including children were killed while 70 others injured in a blast inside a religious seminary in Pakistan’s north western city of Peshawar on Tuesday, local media reported.

According to reports the blast occurred in the main hall of the seminary after an unidentified man placed a bag full of explosives over there.

Children and instructors are among the victims as the blast took place when the classes were underway at the seminary.

A rescue operation has also been launched to shift the injured children to the nearby hospitals for medical assistance.

The doctors say more casualties are feared as some of the wounded children are in critical condition.

No group has so far claimed responsibility of the blast.

On Sunday a bomb blast ripped through a market in the Hazarganji area of south western city of Quetta claiming the lives of three people and injuring seven others.

On September 29 five people were killed and two others injured in a blast in the Akbarpura area of north western city of Nowshera.