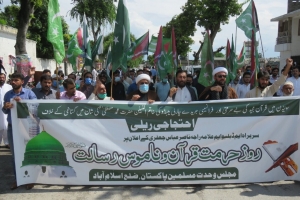 Although Muslims’ request for sanctioning French products is increasing due to blasphemy of its officials, especially President Emmanuel Macron to Prophet Mohammad (PBUH), the French foreign ministry has called for ending these sanctions nu Muslims.

A great campaign has so far been launched by Muslim states against French products since French officials and its president have supported insults against Prophet Mohammad (PBUH).

The French president recently announced in a brazen statement that France will continue to publish offensive cartoons against the Holy Prophet of Islam (PBUH) which drew strong reactions from Muslims.

The insulting caricature has incited Muslims’ anger over the last two weeks.

Iranian Foreign Ministry summoned French charge d’affaires to Tehran Florent Aydalot on Tuesday over the insistence of French officials to support the publication of caricatures in the country which insult the holy prophet of Islam.

In recent years, the French magazine Charlie Hebdo has repeatedly published insulting cartoons about the Holy Prophet of Islam (PBUH).

But the French government and President Emmanuel Macron, instead of taking steps to reduce propaganda attacks on Islam and Muslims, insulting religions and sanctities has been considered a measure of freedom of expression.

Meanwhile, Pakistan on Monday summoned the French ambassador to register a strong protest on the re-publication of blasphemous caricatures of the Holy Prophet of Islam (Peace Be Upon Him) and remarks made by French President Emmanuel Macron.

A statement of Pakistan Foreign Ministry said that Pakistan expressed deep concerns over the recent systematic resurgence of blasphemous acts of republication of caricatures of the Holy Prophet Mohammad (PBUH) and desecration of the Holy Quran by certain irresponsible elements.

“It was underscored that such illegal and Islamophobic acts hurt the sentiments of Muslims across the world, including those in Pakistan. Furthermore, such actions could not be justified in the name of freedom of expression,” it said.

In the meantime, Pakistan’s Prime Minister Imran Khan in a Twitter message said: “Hallmark of a leader is that he unites human beings, as Mandela did, rather than dividing them. This is a time when President Macron could have put healing touch and denied space to extremists rather than creating further polarization and marginalization that inevitably leads to radicalization.”

The ulama in Pakistan and other Islamic states called for sanctioning French goods.