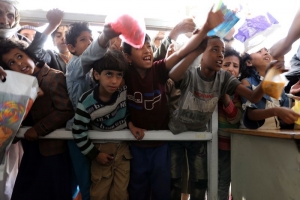 Parts of Yemen are suffering record levels of acute child malnutrition, with nearly 100,000 children now at risk of dying, heightening warnings that the country is approaching a dire food security crisis, a U.N. report and officials said on Tuesday.

Drivers of malnutrition in Yemen worsened in 2020, as the coronavirus pandemic, economic decline, floods, escalating armed conflict and significant underfunding of this year’s global appeal for aid to Yemen have raised the spectre of widespread severe hunger or even famine after almost six years of war.

“We’ve been warning since July that Yemen is on the brink of a catastrophic food security crisis. If the war doesn’t end now, we are nearing an irreversible situation and risk losing an entire generation of Yemen’s young children,” said Lise Grande, U.N. Humanitarian Coordinator for Yemen.

According to a U.N. Integrated Food Security Phase Classification (IPC) analysis of malnutrition in southern Yemen, acute cases in children under five increased about 10% in 2020, to more than half a million.

Cases of children with severe acute malnutrition – the life-threatening form – rose by 15.5% to 98,000, and at least a quarter-million pregnant or breastfeeding women need malnutrition treatment.

“We have been warning for several months now that Yemen was heading towards a cliff. We are now seeing the first people falling off that cliff – those are the children under 5 years of age. Nearly 100,000 of them are at risk of death,” Jens Laerke of the U.N. Office for the Coordination of Humanitarian Affairs (OCHA) told a briefing in Geneva.

About 1.4 million children under five live in south Yemen, which is under the control of the internationally recognised Yemeni government.

IPC data for north Yemen, where the majority of Yemenis live and which is controlled by Iran-aligned Houthi authorities, is not yet available.

Aaron Brent, Yemen country director for CARE International, said the aid group has been hearing of Yemenis in the north increasingly selling assets and taking on debt to procure food.

Famine has never been officially declared in the Arabian Peninsula country, but indicators are deteriorating across the country and Brent said it was vital to act preemptively.

“All the factors are there so that people who are already very vulnerable can move quickly to a famine-like state. The key is always to act before that happens,” he told journalists.

The United Nations describes Yemen as the world’s largest humanitarian crisis, with 80% of the population reliant on humanitarian aid. U.N. officials are trying to revive peace talks to end the war which has killed more than 100,000 people and pushed Yemen to the brink of famine.

Nutrition and other services that keep millions from starvation and disease are gradually closing across Yemen amid an acute funding shortage this year.

The United Nations says it had by mid-October received only $1.43 billion of the $3.2 billion needed for the entire 2020 Yemen humanitarian response.