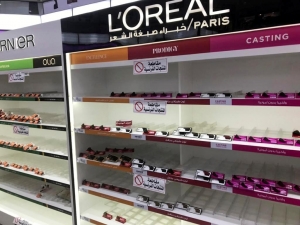 Kuwait’s retail co-ops have pulled French products in boycott over the use of cartoons of the Prophet Mohammad in a French school class on freedom of expression whose teacher was then beheaded by a Chechen teenager.

In Saudi Arabia, the Arab world’s largest economy, a hashtag calling for the boycott of French supermarket retailer Carrefour was the second most trending on Sunday.

France’s foreign affairs ministry said there had been calls to boycott French products, notably food products, in several Middle Eastern countries as well as calls for demonstrations against France over the cartoons.

Muslims see any depiction of the Prophet as blasphemous.

“These calls for boycott are baseless and should stop immediately, as well as all attacks against our country, which are being pushed by a radical minority,” the ministry said.

The ministry also called on authorities to speak out against such boycott actions in order to help French companies and ensure the safety of French citizens.

In Kuwait, the non-governmental Union of Consumer Co-operative Societies, which groups more than 70 establishments, issued the boycott directive in an Oct. 23 circular. Several co-ops visited by Reuters on Sunday had cleared the shelves of items such as hair and beauty products made by French companies.

Union head Fahd Al-Kishti told Reuters the products had been removed in response to “repeated insults” against the Prophet.

The co-ops, some the size of hypermarkets, carry government-subsidised staples and account for a big part of retail in Kuwait. Kuwait’s imports from France stood at 255 million dinars in 2019, according to Kuwait’s Central Statistics bureau.

Kuwait’s foreign minister, who met the French ambassador on Sunday, condemned the Oct. 16 killing as a horrendous crime but stressed the need to avoid insulting religion in official and political remarks that “inflame hatred, enmity and racism”, the ministry tweeted.

Macron said on Twitter France respected all differences in a spirit of peace, but did not accept hate speech and defended reasonable debate. “We will not give in, ever,” Macron said.

France recalled its ambassador to Turkey on Saturday after Turkish President Tayyip Erdogan said Macron, who this month declared war on “Islamist separatism”, needed mental help over his attitude towards Muslims.

The beheading, in which the assailant was shot dead, carried echoes of the Islamist attack in 2015 on the offices of satirical magazine Charlie Hebdo after it republished the cartoons.

After a Danish paper first published the cartoons in 2005, protests and boycotts on Danish goods swept the Islamic world.