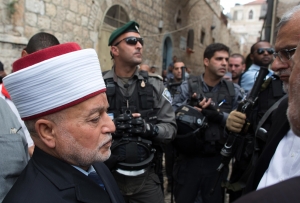 Grand Mufti of Jerusalem and Palestine Sheikh Mohammad Hussein on Sunday condemned the publishing of offensive caricatures of Prophet Muhammad (peace be upon him).

Sheikh Hussein described the caricatures, published in a French newspaper, as immoral and savage, and that they were performed by “a stray group that hates Islam, Muslims and their symbols”.

The grand mufti said all mundane and divine laws prohibit the insulting of religions and their symbols, demanding in the meantime the enactment of international laws that ban the insult of religions and their symbols and punish anyone who insults religious symbols. He warned that the publishing of further hateful material would fuel hatred among people and bring about conflicts between communities.