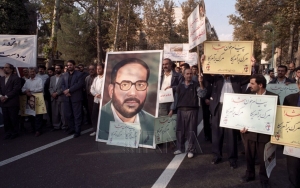 Fathi Ibrahim Abdul Aziz Shaqaqi was born in 1951 in the Palestinian city of Rafah. He majored in mathematics at Birzeit University and became a teacher in the West Bank. During this period, he got acquainted with Palestinian groups, mostly leftist ones, and participated in liberation movement of Palestine.

He then left for Egypt to study medicine. There, he learned other ideas how to deal with occupation of the motherland, his preoccupation about the problems of the Muslim World. He believed in fighting the Israeli occupation should form the pivot of the Islamic teachings to liberate Palestine.

He, then, founded Islamic Jihad Movement of Palestine with the help of other Palestinian students in Egypt. Upon his return to Gaza Strip in 1981, he promoted and established the idea there.

As the leader of the Islamic Jihad Movement of Palestine, he was repeatedly imprisoned by the Zionist regime. He played an important role in the first Intifada in 1987. He was then banished from Palestine to Lebanon in 1988. He was eventually assassinated in 1995 in Malta by terrorist Mossad agents.

As a follower of Imam Khomeini’s ideology of unity of Sunnis and Shias, Shaqaqi made a lot of efforts toward the cause. When a lot of mercenaries of the Global Arrogance and colonialism tried to promote disunity among Muslims, he published an invaluable article in Palestinian magazine al-Nur calling for the Muslim unity.

He believed that the West tried to create a rift among the Muslim in fear of influences of Iran’s Islamic Revolution on other regional countries.

In the articles he also answered some questions about Shia Islam. Criticizing Ibn Taymiyyah, he discussed the importance of the Islamic Revolution and its role of enlightening the Muslims and the people of the region, as well as the fear of foreign powers of materialization of Islamic thoughts in Iran.

He even invited the Christians to unite with the Muslims to defend Palestine and put an end to the Israeli occupation of Palestine.

Shaqaqi was among the first people who promoted the Islamic Revolution and interested Muslims in the Islamic Republic. He introduced Imam Khomeini and his revolutionary ideas to the people of Palestine.

When Saddam invaded Iran and the West and Zionists supported him and propagated that Iran was the cause of rift among Muslims in rider to keep them away from Iran, Shaqaqi made a lot of efforts and helped to acquit Iran of such false accusations. He met with several Islamic figures to introduce the Islamic Republic’s right stances to them.

His ideology has made him intolerable for the Zionist regime. Mossad agents shot him six times on 26 October 1995 at 1:30 p.m. in front of Hotel Diplomat in Sliema, Malta. He was 44 when assassinated by the Israeli state terrorism.

Surely, the only path to liberation of Palestine from Zionists claws