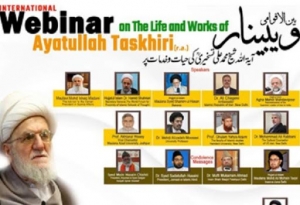 India has held international online event to mark the endeavors and life of prominent Iranian cleric and proximity figure Ayatollah Mohammad Ali Taskhiri on Thursday.
Forty days following the demise of advisor of the Supreme Leader in Muslim world affaits, Ayatollah Mohammad Ali Taskhiri, a number of Shia and Sunni scholars from across the globe have attended the webinar on the life and works of the Iranian Islamic unity figure, reported Taqrib News Agency (TNA).
Participants in the webinar hailed the activities of Ayatollah Taskhiri in the world of Islam and his efforts to promote Islamic teachings across the globe.
Indian scholars lauded Ayatollah Taskhiri as a renowned cultural and international figure in Muslim world and highlighted his efforts to promote Islamic proximity.
Participants also called Ayatollah Taskhiri as a unique character in understanding the international affairs and the current situation in the world of Islam.
Former secretary general of World Forum for Proximity of Islamic Schools of Thought was also praised over more than five decades of endeavors to boost unity among Muslims as the main solution for the issues of Muslims.
Iran’s cultural attaché in India referred to the high thoughts of Ayatollah Taskhiri and stressed the influential role of the scholar in building interfaith dialogue in the modern time.
Molavi Es’haq Madani, advisor of the Supreme Leader in Sunni community affairs, Hujjat-ul-Islam Hamid Shahriari, secretary general of World Forum for Proximity of Islamic Schools of Thought and also Hujjat-ul-Islam Mowlana Seyyed Shamim al-Hussein, prominent cleric from Banaras, India were among participants of the event to mark Ayatollah Taskhiri.