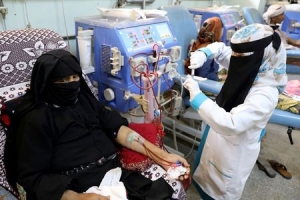 In the Yemeni capital Sanaa, Mohammed al-Ghazaaly’s kidney dialysis machine often cuts out due to an escalating fuel shortage in the country’s north.

When the electricity generator runs out of diesel, nurse Mohammed al-Hattamy turns the blood-filtering machines by hand to prevent clots.

“We try to do our best,” Hattamy said.

Northern Yemen, controlled by the Iran-aligned Houthi movement since it ousted the Saudi-backed government from power in Sanaa in late 2014, has suffered fuel shortages throughout a five-year war that has shattered Yemen’s healthcare system.

Imports of fuel, needed for generators, water pumps and transporting goods, have dropped sharply in the past three months, the United Nations said, deepening a humanitarian crisis that has left 80% of Yemen’s population reliant on aid.

The United Nations says fuel in the north’s informal market is double the official price. Long queues at filling stations are common, and Ghazaaly said he paid an “exorbitant” amount for a taxi he eventually found willing to take him to hospital.

Imports into Houthi-held areas have to go through stringent controls imposed by a Saudi-led military coalition battling the group.

The Houthis accuse the coalition of waging economic warfare by holding U.N.-cleared commercial vessels which want to unload in the north. The coalition, which controls sea and air space, says it is preventing arms smuggling.

Two weeks ago, the Houthis suspended U.N and humanitarian flights to Sanaa in an apparent act of protest, further impacting aid provision as the ill-equipped country also battles the coronavirus pandemic.

Testing and reporting of coronavirus cases in Yemen is low and the United Nations says the virus is circulating undetected.

Ahead of a possible second wave of the virus, the International Committee of the Red Cross this week opened a free 60-bed COVID-19 clinic in the southern port city of Aden, the Yemeni government’s temporary capital.

Fatima Elkendi, a volunteer doctor with a Yemeni charity, said it was hard to treat patients due to the lack of basic supplies.

“What’s more, in Aden infectious diseases such as dengue fever and malaria are spreading. These diseases affect people greatly, due to the lack of proper nutrition and as most of the population is below the poverty line.”