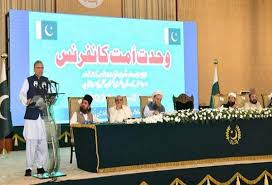 Religious figures, Shia and Sunni scholars from across the country and Pakistani Minister of Religious Affairs also attended the conference held at Pakistan’s presidential palace.

Arif Alvi referred to rejection of terrorism under the name of religion by all religious leaders and said,” No orator or lecturer desecrates prophets or Ahlul Bayt (AS) and once he does so, all schools of thought would announce their disavowal of that.”

Pakistani official stressed,” Takfir should not find a place among us and we should note that no one has the right to excommunicate a Muslim man or desecrates his religious beliefs.”

Arif Alvi reiterated credibility of fatwas (religious statements) based on the holy Qur’an and lifestyle of Prophet Mohammad (PBUH).

“No one should disrespect companions, Kalifs, household of Prophet Mohammad (PBUH)” said the top Pakistani official and called on the government to react against those violating the life or sanctities of religious minorities in the country.

200 prominent clerics and religious leaders from different denominations, Arab and European ambassadors and federal ministers attended the conference to stress necessity of reacting against fake fatwas deviating from the holy Qur’an and Islamic guidelines, respecting the rights of minorities and followers of other religions and also legal confrontation with Takfiri groups, particularly during the month of Muharram.