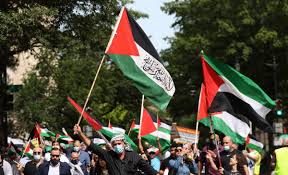 Ali Muhiuddin Al-Qurra Daghi in his tweet slammed the “rulers who do not trust their nations” for obedience of their masters only to protect their throne referring to the recent agreement inked between two Arab states and Israeli regime, reported Taqrib News Agency (TNA).

Following the official signing of an agreement for normalization of ties and establishment of economic and diplomatic relations between Bahrain, United Arab Emirates and Tel Aviv regime, Qatari Foreign Ministry has issued a statement to stress its stance against occupation of the Palestinian lands.

Qatari ministry has also highlighted the necessity of formation of a Palestinian government in Jerusalem al-Quds within the framework of the international resolutions.

Last week and in a meeting of Bahraini and Emirati Foreign Ministers with Israeli Prime Minister Benjamin Netanyahu and US President Donald Trump at the White House, the agreement for normalization of ties between Israeli regime and the two Arab states was officially signed.

The move has been globally condemned for breaching the international laws and people in different countries have taken to the streets to condemn the decision.

Muslims across the globe are rising against the