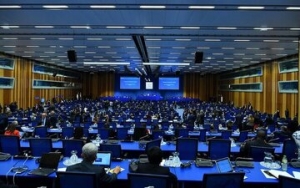 The first day of the 64th IAEA General Conference annual session wound up in Vienna on Monday with the US anti-JCPOA claims once again became isolated in light of objection of majority of participants calling for respecting Iran-IAEA latest agreement.

“I report regularly to the Board of Governors on Iran’s implementation of its nuclear-related commitments under the Joint Comprehensive Plan of Action,” Grossi said addressing 171 representatives, envoys and members of the agency.

The Agency continues to verify the non-diversion of nuclear material declared by Iran under the Safeguards Agreement, he said, adding that evaluations regarding the absence of undeclared nuclear material and activities for Iran continue.

He stressed that JCPOA is an important part of non-proliferation treaty essential for security of the region.

Elsewhere in his remarks, Löfven welcomed Iran-IAEA recent agreement and urged Iran to return to its commitments under the nuclear deal.

In the meantime, head of French Alternative Energies and Atomic Energy Commission (CEA) François Jacq voiced support for the efforts and commitments of the International Atomic energy Agency (IAEA) to safeguard the Joint Comprehensive Plan of Action (JCPOA).

Iran is now following its nuclear program according to its needs but has repeatedly announced that it would return to its commitments if the other signatories of the deal were practically loyal to their commitments.

On the first anniversary of the US withdrawal from the deal on May 8, 2019, Tehran decided to reduce its commitments to the JCPOA, based on Article 26 and 36, and set a deadline for Europeans to remedy breaches.

Iran says it is acting under the provisions of Paragraph 36 of the JCPOA which provides the country with the right to reduce its nuclear commitments as the US has withdrawn from the deal and the other parties are not honoring their commitments.

While US representative repeated the claims of Iran’s support for terrorism and instability in the region and urged the IAEA to increase inspections on Iran’s nuclear activities.

Head of the Atomic Energy Organization of Iran (AEOI) Ali Akbar Salehi said on Monday that there is no other way to protect multilateralism than to end the US destructive behavior.

Referring to the US government’s resolve to destroy the Joint Comprehensive Plan of Action (JCPOA) as one of the most important achievements of multilateralism in the framework of the nuclear non-proliferation treaty, Salehi said that there is no way but to get united and put an end to the destructive behavior of the current US administration for the interests of all states in the international community.

The 64th meeting of the IAEA General Conference started in Vienna on Monday. The event which is held by representatives, ambassadors, and high-ranking officials of 171 countries will work until Friday.