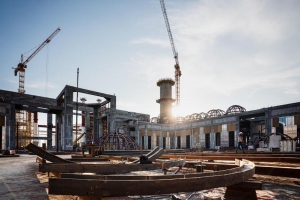 Nur-Sultan mayor Altay Kulginov has inspected the contraction site of the mosque that will be the largest mosque in the country and Central Asia, Kazinform reported Tuesday.

The country’s largest mosque, which is under conduction, sits between Kabanbay batyr and Mangilik El Avenues. After construction, the mosque will be able to receive 30 thousand people at once and claim the title of the largest mosque in the Central Asian region. On his Instagram account, Kulginov stated that the mosque’s construction is funded through charitable donations from the Turkish company. He also assured that all the sanitary rules are observed at the contraction site.