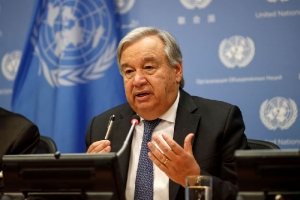 United Nation’s Secretary-General António Guterres wrote on Thursday in an article on the occasion of 75th Anniversary of the atomic bombings of Hiroshima and Nagasaki that the lingering suffering caused to the survivors of the US bombing the two Japanese cities should give us daily motivation to eliminate all nuclear arms.

The full text of Guterres’ article a copy of which was obtained by IRNA is as follows:

This month marks the 75th anniversary of the atomic bombing of Hiroshima and Nagasaki when humanity learned of the devastation a single nuclear bomb can unleash.  The lingering suffering caused to the survivors, the hibakusha, should give us daily motivation to eliminate all nuclear arms. They have shared their stories so the horror experienced by Hiroshima and Nagasaki will never be forgotten.  Yet the nuclear threat is growing once more.

A web of agreements and instruments has been constructed to prevent the use of these uniquely destructive weapons and ultimately to eliminate them.  But that framework has idled for decades and is starting to erode.  The potential that nuclear weapons will be used – intentionally, accidentally, or as a result of a miscalculation – is dangerously high.

Fuelled by mounting international tensions and the dissolution of trust, relations between countries that possess nuclear weapons are devolving into dangerous and destabilizing confrontations. As governments lean heavily on nuclear weapons for security, politicians are trading heated rhetoric about their possible use and devoting vast sums of money to improving their lethality, money that would be much better spent on peaceful, sustainable development.

For decades, nuclear testing led to horrific human and environmental consequences.  This relic of a former age should be confined there forever.  Only a legally-binding, verifiable prohibition on all nuclear testing can achieve this.  The Comprehensive Nuclear-Test-Ban Treaty has proven its worth, yet some States have still to sign or ratify the treaty, preventing it from fulfilling its full potential as an essential element in the framework to eliminate nuclear weapons.

Along with climate change, nuclear weapons represent an existential threat to our societies.  Most of the roughly 13,000 nuclear arms currently in global arsenals are vastly more destructive than the bombs dropped on Hiroshima and Nagasaki.  Any use would precipitate a humanitarian disaster of unimaginable proportions.

It is time to return to the shared understanding that a nuclear war cannot be won and must not be fought, to the collective agreement that we should work towards a world free of nuclear weapons, and to the spirit of cooperation that enabled historic progress towards their elimination.

The United States and the Russian Federation, as the possessors of some 90 percent of nuclear weapons, are expected to lead the way. The “New START” treaty retains verifiable caps.  Its extension for five years would buy time to negotiate new agreements, including by potentially bringing in other countries possessing nuclear weapons.

Next year, the United Nations will host the Review Conference of the Treaty on the Non-Proliferation of Nuclear Weapons (NPT), one of the most successful international security agreements.  It contains the only treaty-based commitments undertaken by the five largest nuclear-armed countries to pursue the elimination of nuclear weapons and imposes verifiable obligations not to acquire or develop nuclear weapons.  Its near-universal membership means the vast majority of the international community is bound by these commitments.  The NPT Review Conference is an opportunity to stem the erosion of the international nuclear order.

Fortunately, most United Nations Member States remain committed to the goal of a world free of nuclear weapons. This is reflected in the 122 countries that supported the adoption of the Treaty on the Prohibition of Nuclear Weapons. They understand that the consequences of any use of nuclear arms would be catastrophic.  We cannot risk another Hiroshima or Nagasaki or worse.  As we reflect on the suffering of the hibakusha, let us view this tragedy as a rallying cry for humanity and recommit to a world free of nuclear weapons.