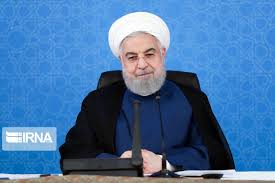 Iranian President Hassan Rouhani highlighted Thursday the heavy duty that the correspondents have in society to spread happiness and hope during the fight against the coronavirus pandemic.

The president appreciated journalists and correspondents for their efforts to make people vigilant and aware of the enemies’ plots.

As the president said, the country today is in difficult conditions.

On one hand, there are enemies’ maximum pressure and threats, and on the other hand, there is coronavirus pandemic, said the president censuring the enemies for trying to disappoint the nation.

He further commemorated the reporters and journalists who lost their lives during the fight against the deadly virus.

In a related development, Managing Director of National Petrochemical Company of Iran Behzad Mohammadi told IRNA on August 4 that President Rouhani is to open three big petrochemical projects on Thursday.

The projects with an investment of 1.57 billion dollars include Kimia Pars Middle East, Kaveh, and Lorestan Catalyst, Mohammadi said.

Among a total of 27 petrochemical projects planned to be inaugurated by the next two years, some 17 plants will open till the end of the current Iranian year on March 20, Mohammadi noted.