May 12, 2021
Breaking News
2020-08-01
Abrar House
Home
News
Aoun: We are obliged to defend ourselves as Israeli violations of Resolution 1701 continue 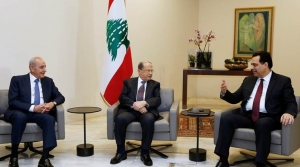 an increasing rate and its attacks on Lebanon continue.

“I call upon the Lebanese army to protect Lebanon’s sovereignty against Israel’s greed while committing to UN Resolution 1701 and protecting our territories and waters,” Aoun said Saturday on the occasion marking the 75th anniversary of the Lebanese Army Day.

During his televised speech from Baabda Palace, the president called on the new graduating class of officers to the Army to keep an eye on Lebanon’s sovereignty as Israeli attacks continue.

“Your duty is to remain the watchful eye on Lebanon’s sovereignty in the face of Israeli ambitions,” he said, addressing the officers.

Israel is violating UN Resolution 1701 at an increasing rate and its attacks on Lebanon continue, Aoun said. “We are also obligated to defend ourselves, our land and water and our sovereignty.”

He announced that the graduating class of the army officers would be named the class of “Diamond Jubilee” to commemorate the 75th anniversary of the Lebanese Armed Forces (LAF).

The life of Prince Philip was celebrated at