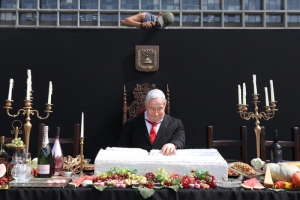 A statue in a Tel Aviv square of Israeli Prime Minister Benjamin Netanyahu enjoying a “Last Supper” feast added new bite on Wednesday to mounting protests against his handling of the coronavirus crisis.

An artwork by Israeli artist Itay Zalait, that includes a sculpture of Israeli Prime Minister

Netanyahu, whose popularity has plunged in opinion polls amid 21.5% unemployment, said his depiction in a mock tableau of Jesus’s final meal before his crucifixion, was tantamount to a death threat.

In the installation, Netanyahu sits alone at a grand 10-metre (33 ft) long table, with two candelabras, grabbing at a huge cake resembling an Israeli flag.

Moet & Chandon champagne, Chivas Regal scotch and Courvoisier cognac are placed alongside a heaping spread of fruit and meats, accompanied by a single cigar, to allude to the corruption allegations against Israel’s longest-serving premier.

Netanyahu denies any wrongdoing in three corruption cases against him, which include allegations he illegally received gifts of champagne and cigars from affluent businessmen.

His trial, the first for a serving Israeli prime minister, opened in May and witnesses are to begin testifying in January.

Passersby, many of them wearing face masks, stopped to snap photos of the sculpture by Tel Aviv artist Itay Zalait. He said the work was meant to symbolise the “Last Supper of Israeli democracy”.

“Many people refer to (Netanyahu) as a genius – Mr Economy, Mr Security – he’s more than anyone else, he’s like the son of God,” Zalait said, standing next to the sculpture.

“Mr. Economy … people don’t have food to bring for their children,” he said.

Netanyahu, who has drawn accusations of autocratic rule by using emergency regulations to fast-track social distancing edicts, took to Twitter to term the exhibit “a shameful threat of crucifixion”.

The Last Supper, as depicted in a 15th century mural by Leonardo da Vinci, shows Jesus at the table with his apostles in Jerusalem. The mural, one of the most famous paintings in the world, is in a Milan convent.

Zalait’s work is displayed in Tel Aviv’s Rabin Square – where several anti-Netanyahu demonstrations have been held this summer.