The Kingdom of Saudi Arabia announced Monday health protocols to prevent the spread of the novel coronavirus (COVID-19) during the 2020 Hajj season. 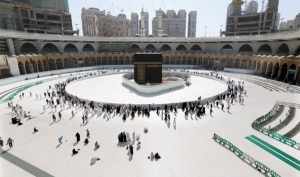 In a statement carried by the Saudi Press Agency (SPA), the Saudi Center for Disease Prevention and Control (SaudiCDC) affirmed the keenness of the Kingdom’s government to follow the highest health standards and the most precautionary measures during this year’s Hajj, which will be organized with very limited numbers, in order to preserve the health of pilgrims and ensure the provision of the best health services to them.

The controls forbid entrance to the holy sites (Mina, Muzdalifah, Arafat) without a permit, starting from Sunday, 28 Dhu al-Qa’ida 1441 AH (19 July 2020) until the end of Sunday 12 Dhu al-Hijjah 1441 AH (2 August 2020). They allow completion of Hajj for suspected cases of coronavirus, after evaluation by the specialist doctor, so that they can be attached to the group of suspected cases. A separate residential building or at least a floor shall be allocated to them, in addition to arranging a suitable transport and itinerary plan for them to perform their hajj rituals easily.

Hajj workers who suffer from flu-like symptoms shall not be allowed to work until those symptoms disappear and obtain recovery reports from attending physicians. All workers and pilgrims are required to wear face masks at all times, and to properly remove and discard them.

All participants in the Hajj pilgrimage shall adhere to the precautionary health measures including good food and water hygiene practices and social distancing.

In the Grand Mosque, touching or kissing the honorable Kaaba or the Black Stone are prevented, in order to ensure social distancing between the pilgrims.

It is noteworthy that Saudi Arabia had earlier issued a decision to organize this year’s Hajj with a limited number of pilgrims from various nationalities residing in the Kingdom. The decision, which was welcome by the counties of the world and organizations, reflects Saudi Arabia’s keenness to prevent the spread of the virus and preserve the health of the pilgrims.

Restrictions had been in place in both countries since mid-March and their gradual lifting has allowed commercial businesses and public venues to reopen.

Other Gulf countries have also moved to ease restrictions, although Kuwait has maintained a partial curfew and Qatar, Bahrain and Oman did not impose one at all.

Saudi Arabia, which has the highest count among the six Gulf states, reported more than 4,100 cases on Friday and on Saturday to take its total to 205,929, with 1,858 deaths. The daily tally first rose above 4,000 in mid-June, but had dipped.

The United Arab Emirates, where daily infection rates recently dropped to between 300 and 400 from a peak of some 900 in late May, registered more than 600 cases on Friday and over 700 on Saturday, taking its toll to 50,857, with 321 deaths.

Dubai, the region’s business and tourism hub is due to reopen to foreign visitors on July 7, although this has not been implemented at a federal level in the UAE, which does not provide a breakdown of cases for each of its seven emirates.

Qatar, which has the second highest regional infection rate, has seen its daily case numbers fall from a peak of more than 2,000 in late May to around 500 on Saturday, bringing it near to 100,000 cases in total.

In Oman, the health minister warned on Thursday that there had been a disturbing surge in infections in the last six weeks and urged people to comply with health measures.

Iran, the epicentre for the disease in the Middle East with a total infection count of 237,878 and 11,408 deaths as of Saturday, has imposed new curbs to halt the spread of the virus.