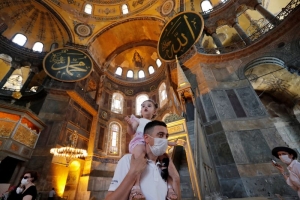 from a museum to a mosque “is an attack on Turkey’s sovereignty”, President Tayyip Erdogan said on Friday.

Erdogan has proposed restoring the mosque status of the UNESCO World Heritage Site, a building at the heart of both the Christian Byzantine and Muslim Ottoman empires and today one of Turkey’s most visited monuments.

“Accusations against our country about Hagia Sophia directly target our sovereign rights,” said Erdogan, responding to concern over the proposal from the West, particularly Greece, France and the United States.

“We are determined to continue to protect the rights of Muslims, our country’s majority faith, as well as members of all other faiths and religions,” he added at the formal opening of another mosque in Istanbul.

A Turkish court on Thursday heard a case aimed at converting the Hagia Sophia back into a mosque. It will announce its verdict within 15 days.

Earlier this week Turkey said it was “shocked” at a statement by U.S. Secretary of State Mike Pompeo urging Erdogan not to go ahead with the plan.

France’s Foreign Ministry said on Thursday that the sixth-century structure, which served for nine centuries as a Christian cathedral before the Ottoman conquest of Constantinople in 1453, must remain open to all.