British Prime Minister Boris Johnson cautioned Israel on Wednesday against annexation in the occupied West Bank, saying it would violate international law and harm its drive to improve 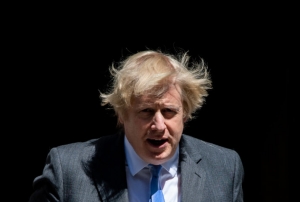 relations with the Arab world.

Israeli leaders decided in May that a cabinet debate on annexing parts of the West Bank, under a U.S. plan for Israeli-Palestinian peace, could begin from July 1, raising speculation the government would convene on that date.

But with no agreement yet with Israel’s main ally Washington on the scope and timing of the move, and talks ongoing, no cabinet session was scheduled for Wednesday.

“Annexation would represent a violation of international law,” Johnson said in an opinion piece for Yedioth Ahronoth, Israel’s top-selling daily, echoing remarks he made in parliament last month.

“Annexation would put in jeopardy the progress that Israel has made in improving relationships with the Arab and Muslim world,” Johnson wrote, calling for a solution that allows justice and security for both Israelis and Palestinians.

Under the peace blueprint that U.S. President Donald Trump announced in January, Israel has said it intends to extend its sovereignty to Jewish settlements and the Jordan Valley in the West Bank, in up to 30 percent of the territory.

Palestinians, who have rejected the Trump proposal, seek to establish a state in the West Bank and Gaza Strip, with East Jerusalem as its capital. Israel captured those areas in a 1967 war and withdrew soldiers and settlers from Gaza in 2005.

Palestinian leaders, the United Nations, European powers and Arab countries have all denounced annexation and consider settlements that Israel has built on occupied land as illegal.

Israel disputes this, citing biblical, historical and political roots in the West Bank.

Johnson, whose maternal great-grandfather was a Moscow-born Jew, said he had once worked in an Israeli kibbutz during his youth. In the opinion piece, he said he has been “a passionate defender of Israel”.