The White House sought to play down reports it knew Russia had paid the Taliban bounties to kill U.S. 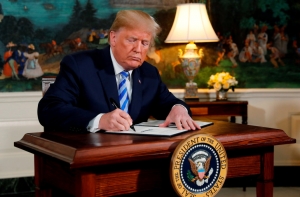 troops, promising to brief Democrats on Tuesday after being accused of only sharing information with President Donald Trump’s fellow Republicans.

Trump administration officials said there was no consensus on the underlying intelligence among U.S. agencies and Trump had not been made aware of it.

But two Republican lawmakers said they remain concerned after hearing details from the White House at a meeting on Monday.

“We believe it is important to vigorously pursue any information related to Russia or any other country targeting our forces,” Representatives Mac Thornberry and Liz Cheney, who attended the meeting, said in a statement.

The New York Times and Washington Post broke the story, with the Post reporting on Sunday that several American soldiers were believed to have died as a result of the program, which the Kremlin has denied.

“Unfortunately, unauthorized disclosures now jeopardize our ability to ever find out the full story,” he said in a statement.

That didn’t appear to satisfy House Speaker Nancy Pelosi, who said after speaking with Ratcliffe and CIA Director Gina Haspel that “many serious questions remain.”

In a statement, the Pentagon said that it was continuing to evaluate intelligence.

“To date, (the Department of Defense) has no corroborating evidence to validate the recent allegations found in open-source reports,” Pentagon spokesman Jonathan Hoffman said.

Several Democrats in the House of Representatives will hear details from the White House at 8 a.m. (1200 GMT) on Tuesday, an aide said.

The newspaper reports, suggesting Trump may have ignored a threat to U.S. troops as he seeks to improve relations with Russia, could damage Trump as he seeks re-election on Nov. 3. The United States is trying to extricate itself from Afghanistan after nearly two decades of war.

Citing unidentified sources, the New York Times reported on Friday that Trump had been notified of the intelligence and the National Security Council discussed the problem at an interagency meeting in late March.

White House spokeswoman Kayleigh McEnany denied Trump was briefed and said there was “no consensus within the intelligence community.”

Trump said on Sunday that U.S. intelligence officials told him they had not informed him of the purported program because the information was not credible.

The sources indicated U.S. government agencies and experts on balance believed the intelligence reporting to be credible.

The Kremlin on Monday dismissed the reports as “lies.”

The Post said the intelligence on the bounty scheme stemmed from U.S. military interrogations of captured militants and was passed up from U.S. Special Operations forces in Afghanistan.

Reuters could not immediately confirm these reports.

The United States has in recent years accused Russia of possibly providing support, including weapons, to elements of the Taliban. But U.S. military officials have never publicly accused Moscow of putting bounties on the heads of U.S. or allied soldiers.

Democratic presidential candidate Joe Biden on Tuesday criticized President Donald Trump’s handling of a reported Russian effort to pay the Taliban to kill American troops in Afghanistan, saying his actions were a “dereliction of duty.”

The White House has said Trump did not receive a personal briefing on intelligence about the alleged Russian program. But the administration has yet to squarely address whether Trump had received a written briefing, whether he had read it and why he had not responded more aggressively if he had.

Biden, responding to questions from reporters, said lawmakers from both parties should “demand the facts” about the claims. The former vice president added that he was considering asking for a classified intelligence briefing on the matter.

“The idea that somehow he didn’t know or isn’t being briefed, it is a dereliction of duty if that is the case. … If he was briefed and nothing was done about this, that’s a dereliction of duty,” said Biden, adding that the American public should “conclude that this man isn’t fit to be president United States of America.”

The Trump campaign did not immediately respond to a request for comment on the criticism.

Biden spoke at a high school in Wilmington, Delaware, where he took questions from reporters for the first time in months after delivering a speech attacking Trump’s handling of the coronavirus pandemic.

“He doesn’t seem to be cognitively aware of what’s going on,” Biden said, throwing one of Trump’s criticisms of the Democrat back at him and previewing the sparring that could take place at their debates.

The Republican president trails Biden in opinion polls ahead of the Nov. 3 election amid the pandemic’s health and economic crises, and nationwide protests against police brutality.

Biden on Tuesday released an updated plan to tackle the pandemic, calling for more COVID-19 testing and hiring at least 100,000 contract tracers.

“The American people don’t make enormous sacrifices over the past four months so … you can waste all their efforts they have undertaken with your midnight rantings and tweets,” Biden said of Trump.

He predicted that the coronavirus outbreak would likely worsen with the onset of the flu season and said preparations should include more flu vaccines.

Biden said that, if elected, he would ask the federal government’s top disease expert, Dr. Anthony Fauci, to serve another term.

He also said he expected to announce his running mate in early August.

Trump and his allies say the toll of the virus – which has killed more than 126,000 Americans, according to a Reuters tally – could have been larger without travel bans he put in place for visitors from China, and later from Europe.

They have argued that the increasing number of confirmed cases in recent weeks is largely attributable to more testing, although the rate of positive tests has also been rising.

Trump campaign spokeswoman Courtney Parella said Biden was “fearmongering and rooting against America’s success” while Trump led a public and private-sector mobilization that had slowed the spread of the virus.