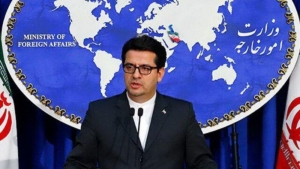 US plan to extend arms embargo on Iran.

Speaking in his weekly press conference on Monday, he said that Foreign Minister Zarif will deliver a speech at UN Security Council session about Resolution 2231 on Tuesday through a video conference.

He went on to say, “Foreign Minister Zarif will address the Security Council on Resolution 2231 tomorrow.”

“Due to our negotiations with other parties, we believe that another defeat awaits the United States,” he stressed.

Stating that European troika’s view of extending Iran’s arms embargo for another three years is not acceptable by Iran, he said, “The approach of the West, especially the United States, about Iran’s defense capabilities is a security approach that we do not accept it.”

He went on to say that Iran is serious about its defense and missile capabilities, adding, “All the progress of Iran in the field of defense has been achieved during the period of sanctions which indicates that we do not care about sanctions.”

“The continuation of Iran’s arms embargo is contrary to Resolution 2231, and Europe must accept the consequences,” Mousavi stressed.

Saddam’s accomplices in chemical attacks against Iran should be sued

Top military Aide to the Leader of the Islamic Revolution said those who supported the former Iraqi dictator in using chemical weapons against Iran during the eight-year war should be put on trial.

“Saddam committed the gravest crimes against humanity by launching 252 chemical bombardments on the Iranian cities during the eight-year Imposed War [1980-1988],” Major General Yahya Rahim Safavi said on Sunday, on the sidelines of a national conference on passive defense against chemical weapons.

“Those who provided Saddam with chemical weapons during the war and turned a blind eye on his brutalities, are accomplices in his crimes against the Iranian nation and the martyrdom of thousands of Iranian soldiers,” he added.

Major General Safavi stressed, “Saddam’s supporters during the Imposed War should be put on trial in The Hague [International Court of Justice].”

Elsewhere, the senior military commander noted that the Iranian scientists in the defense sector have made considerable progress in the field of chemical elements, as well as other defensive aspects, through the past years, to remove the specter of war from the country.

“We have carried out significant researches and have had breakthroughs in the microbial, biological and chemical fields,” he added.

On June 28, 1987, Saddam Hussein’s regime used the chemical weapons made by Western countries against civilians of Sardasht, northwest of Iran, to make the Islamic Republic the first victim of chemical weapons.

As a result of this war crime, some 130 out of 12,000 people residing in Sardasht lost their lives while more than 8,000 others suffered injuries. Although 33 years have passed since the attack, people are still suffering from its consequences.

The chemicals, provided by Western states, had a long-term chronic effect, especially on children for years to come.

Germany, Italy, the UK, the US, the Netherlands, and several other countries provided the Iraqi dictator with the equipment and material to build chemical weapons apparently because they didn’t want Iran to be the winner of the eight-year war.

What adds insult to the injury of those residing in the region is the fact that the international communities, even the United Nations, never condemned this heinous crime against humanity.

June 28 has been designated as the International Day of Countering the Convention Prohibiting Chemical Weapons.

Tehran Military Prosecutor Gholam Abbas Torki on Monday explained some details about the case of the Flight 752, the Ukrainian passenger plane that was mistakenly downed near Tehran in January 2020.

Stating that there has been no evidence of cyber and electronic hacking, external malfunctions in defense and missile systems, and intrusion into systems or networks so far, Torki said, “We have found no evidence of sabotage and espionage on the plane, and traces of missile fragments fired on the fuselage are evident.”

“The plane exploded due to a collision with the ground and its parts were scattered to a large radius of the crash site. Due to the residential location, we encountered problems in terms of collecting aircraft parts and maintaining the scene,” he added.

“The portable system which fired the missile did not accurately determine the real north after rebooting, and this huge mistake caused the operator of the air defense system to see the plane on its radar as a target that is approaching Tehran from the northwestern region,” he said.

Torki went on to say, “The operator of the air defense system notified the identified target to the relevant coordination center, but did not receive a response.”

“Unfortunately, the operator fired while the connection was disconnected only for a few seconds,” he said.

“The biggest mistake was that the system fired without receiving permission from the network,” he stressed.

Torki noted, “The ones who made these mistakes were arrested.”

The Tehran-Kyiv flight was unintentionally shot down by an Iranian air defense unit shortly after taking off from Tehran on January 8, killing all 176 passengers and crew members on board.

The Iranian operator was reported to have mistaken the Boeing jetliner for a cruise missile.

The incident came as Iranian air defenses were at the highest level of alert following the country’s missile attacks against US bases in Iraq, which came in retaliation for Washington’s assassination of senior Iranian commander Lieutenant General Qasem Soleimani.

Iranian Deputy Foreign Minister for Legal Affairs Mohsen Baharvand said on Sunday that decoding the black box of the Ukrainian plane will begin on July 20, under the supervision of an Iranian team in France.