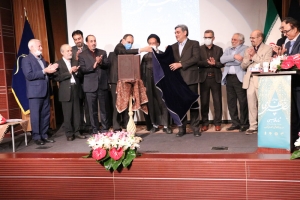 old manuscripts like Khamsa of Nezami helps restore Islamic Iran’s cultural and civilizational identity and form attachment to such works by citizens.

Esmaeili made the remarks in the unveiling ceremony on Saturday evening of the precious facsimile of Shah Tahmasp Khamsa, a versed compilation by 12th-century Persian poet Nezami Ganjavi and transcribed and painted in 16th century at the order of Safavid ruler Shah Tahmasp I.

Esmaeili said that Shahnameh of Ferdowsi, Khamsa of Nezami, Haft Owrang of Jami and Kalila & Dimna are among old literary works receiving widest attention from artists for painting and transcribing.

He also said that Shah Tahmasp’s Shahnameh and Khamsa have an individual position among precious manuscripts left from the golden age of book illumination in the early Safavid era.

Shah Tahmsp’s Khamsa was transcribed by Shah Mahmoud Neyshaburi in Nastaliq style and includes 800 types of marginalia, 14 miniatures from Safavid era masters as well as other styles of illumination which make it the most glorious, precious manuscript of Khamsa of the time, according to the official.

He added that the original manuscript is kept in the British Library and it’s not known how and when it was extracted from the Qajar royal library.

In the same ceremony, Bahman Namvar Motlaq, the secretary of the conference, said that republishing Khamsa of Nezami is not just the revival of an artistic work, but rather indicates attempts underway in line with the reproduction of a discourse which restores Iranian identity and aesthetics, as it can be seen in late artworks which contain a track of the oil Iranian art.

The head of Iranian Academy of Persian Language and Literature Gholamali Haddad Adel, who also attended the unveiling ceremony, underlined that the compilation of artistic works like Shah Tahmasp’s Khamsa and Shahnameh bespeaks the depth of cultural work and efficient cultural management applied at that time which resulted in the gathering of tens of artists together from across Iran to create such a masterpiece.

Mohammad Mojtaba Hosseini, Deputy Minister of Culture and Islamic Guidance in Arts Affairs, thanked Iranian Academy of Arts for republishing the precious book and said: “When twenty artists are distinguished and collected to create such a work, it shows that there should have been certainly two hundred, two thousand or even twenty thousand active artists. This indicates how the rulers of the time appreciate arts.”

The illuminated copy of Khamsa of Nezami ordered by Shah Tahmsp of Safavid has 808 pages and 17 miniatures. The book was compiled in around 1556 AD. Iranian Academy of Arts made the facsimile of the book in cooperation with Tehran Municipality.