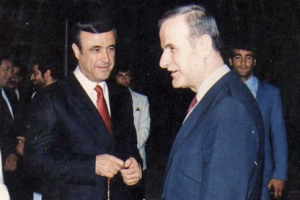 The exiled uncle of Syrian President Bashar al-Assad was found guilty on Wednesday of acquiring millions of euros worth of French property using funds diverted from the Syrian state, and sentenced to four years in prison.

The French court ordered the seizure of all of Rifaat al-Assad’s property in France — which judicial sources estimate are worth 100 million euros ($113 million) — as well as a property worth 29 million euros in London.

Rifaat al-Assad, 82, has lived in exile, mostly in France, since the mid-1980s, after being accused of trying to seize power from his brother, then-President Hafez al-Assad, Bashar’s father. He previously commanded troops accused of killing thousands of people to crush an Islamist uprising in 1982.

French judicial authorities suspected him of having unduly acquired real estate in several countries between 1984 and 2016 with funds from Syria. He repeatedly denied the allegations and said he acquired his wealth as a gift from the Saudi king.

The French court also ordered him to pay 30,000 euros to the anti-corruption organisation Sherpa, which first filed a legal complaint against him in 2013.

“This ruling shows that nobody escapes justice and there is no impunity,” Sherpa’s lawyer Vincent Brengarth told reporters.

Among the properties that will be seized is a mansion on the prestigious Avenue Foch in Paris.

“It’s an extremely harsh decision that seems unjustified,” Assad’s lawyer Benjamin Grundler told reporters, adding that he would appeal. “There are no funds of Syrian origin in this case. All funds are legitimate.”

He will not be sent to prison pending the appeal.

In 2017, Spanish authorities seized more than 500 Spanish properties from him, worth about 700 million euros, as part of a Franco-Spanish money-laundering operation.