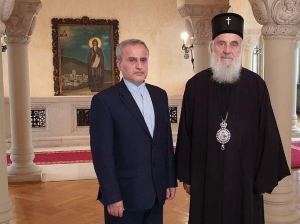 Archbishop of Serbian Orthodox Church Patriarch Irinej in a meeting with Iran’s ambassador in Belgrade welcomed dialogue among the religions.

Describing belief in God as one of the main commonalities among divine religions, he said that every human being who enjoys minimum rationality will never deny the existence of God.

Unfortunately, in many societies religion is used only as a slogan and they only observe religious issues in some matters apparently.

Wherever is dialogue, war and violence will leave there, he said.

Appreciating Iran for adopting principled stances in support of Serbia’s territorial integrity, he called for all-out development of mutual cooperation in various arenas.

Iran’s Ambassador in Belgrade Rashid Hassanpour described interfaith dialogue as the only way to reach a common understanding, peace and security, and voiced Iran’s full readiness to hold interfaith talks with the Serbian Orthodox Church.

Referring to the political resolve of Iran and Serbia for development of relations, he emphasized his country’s principled positions in support of Serbia’s territorial integrity and national sovereignty.

Secretary General of the Organization of Islamic Cooperation