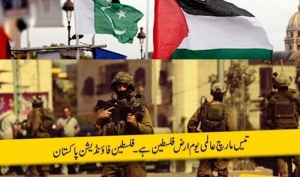 Pakistan political parties and religious leaders expressing solidarity with the oppressed nation of Palestine on Tuesday demanded an end to Gaza Siege and illegal occupation of Palestinian land by the Zionist regime.

They made the remarks during a video conference to mark the Land Day of Palestine organized by Palestinian Foundation of Pakistan in southern city of Karachi.

Due to the coronavirus outbreak the conference was held through a video link and was attended by prominent Pakistani political and religious leaders.

The speakers in their messages expressed serious concerns over the increasing coronavirus cases in Palestine saying that illegal Zionist forces are using the virus outbreak as a tool to further enhance the miseries of the people of Palestine.

They demanded that the international community especially the Muslim world take notice of the situation and help the oppressed nation of Palestine in this time of difficulty.

They said that people and the government of Pakistan would continue to support the struggle of Palestinian nation.

The speakers condemned the continued blockade of Gaza by Zionist forces and also called upon the international community to play its part in resolving the Kashmir dispute.

According to Foreign Ministry’s Information and Press Department, the statement said that in the culture and history of the Palestinian people’s campaign, March 30 marks Land Day of Palestine which is reminiscent of Palestinians’ protest and resistance to the Zionist occupiers.

The day is considered a turning point in the Palestinian people’s fight and resistance to the occupying regime, and it is an integral part of the oppressed Palestinians’ political life which has been formed due to protest to hostility, racial discrimination, destruction of villages and forced displacement of the Palestinians.