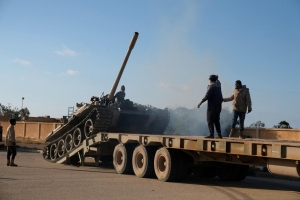 Haftar’s eastern-based Libya National Army has on several occasions in recent weeks refused to grant permission for the regular U.N. flights to land, the U.N. mission in Libya (UNSMIL) said in a statement.

The LNA has been trying since last April to capture the capital Tripoli from the internationally recognised government but has failed to breach the city’s defences.

U.N. envoy Ghassan Salame has been mediating between Haftar, who is backed by the United Arab Emirates and Egypt, and the Tripoli government supported by Turkey.

But relations have been difficult as UNSMIL has condemned air strikes blamed on the LNA, though mostly without mentioning the force by name.

Eastern officials have accused Salame of being biased against them, charges denied by the United Nations.

UNSMIL has a large base in Tripoli and also provides humanitarian relief for migrants and people displaced by the conflict.