February 21, 2020
Breaking News
2020-02-12
Hassan
Home
News
News
At UN, Palestinian president says ‘we reject the US plan because of its unilateral steps’ 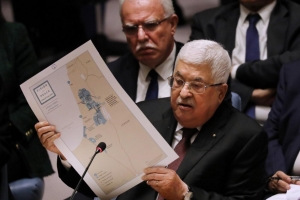 Palestinian President Mahmoud Abbas said on Tuesday that he rejected the US so-called “peace plan” because of its unilateral steps and because it violates United Nations resolutions.

Speaking before the UN Security Council on the American so-called “deal of the century”, presented in Washington on January 28, President Abbas said the plan annuls Palestinian legitimacy and rights to self-determination, freedom and independence while legitimizing illegal Israeli settlements and annexation of occupied Palestinian land.

Abbas urged the international community not to consider the plan as an international reference for negotiations. “It is an Israeli-American pre-emptive plan in order to put an end to the question of Palestine,” he said.

The Palestinian President stressed that the plan was rejected because it does not bring peace or stability to the region, rather it rewards the occupation instead of holding it accountable for its crimes. He also maintained that the Palestinians will confront its application on the ground.