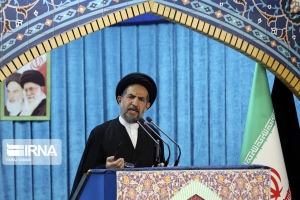 Islamic Revolution Guard Corps (IRGC) paved the way for another power, adding that the main pillar of US politics in the region has been collapsed while US allies feel the same threat.

Addressing the people in the second sermon of Friday prayers,  Mohammad Hassan AbuTorabi Fard said that the people of Iraq, Syria, Lebanon, Yemen, Bahrain, and Turkey and other Muslim nations along with the Iranian nation have formed a unified front in dealing with the US avarice policies and its puppet rulers.

Mohammad Hassan AbuTorabi Fard said “In the light of a correct understanding of pure Islam, Islam has become a powerful school of thought for turning the nations of the region into a decisive power, and with the operations that took place (referring to Iran’s missile attacks on US airbase in Iraq) the US military power in the region has lost face.

Russia has strongly condemned the US for threatening to assassinate Brigadier General Esmaeil Qa’ani, the new commander of the Quds Force of Iran’s Islamic Revolution Guards Corps (IRGC).

“I state once again that such statements are unacceptable for us. Such remarks have been made beyond rights and law, and representatives of world states are not entitled to utter them,” Russian Foreign Ministry spokeswoman Maria Zakharova said on Thursday.

Earlier in the day, Iranian Foreign Ministry Spokesman Abbas Mousavi denounced Washington’s assassination threat against General Qa’ani, saying that the latest remarks by US Special Representative for Iran Brian Hook “are an official publicizing and the blatant unveiling of targeted and state terrorism by the United States.”

“Now, after the Zionist regime, the US is the second regime to officially announce that it has employed the resources of its government and armed forces for terrorist acts and that it will continue them in the future,” Mousavi added.

The reaction came after Brian Hook, the US special representative for Iran, said Thursday that General Esmail Qa’ani could face the fate of his predecessor, General Qasem Soleimani, who was assassinated on January 3.

Zarif, normally a regular at the World Economic Forum, canceled on Monday, with his ministry citing program changes. Organizers of the annual gathering in the Swiss ski resort did not comment on the reason given.

While Iran was absent from the corridors of the conference center, there was an urge for de-escalation among those present.

Iraqi President Barham Salih said he had a productive conversation on Iran with U.S. President Donald Trump, who made few public comments on the issue while in Davos, after signaling this month he was ready to de-escalate the situation.

“We had a very candid conversation (about) the need for basically restraint, calming things down… This is not time for another conflict,” Salih said on Wednesday.

Washington blamed Qaseem Soleimani, Iran’s top general, for masterminding attacks by Iran-aligned militias against U.S. forces in the region. His killing in a U.S. drone attack left regional analysts concerned it could spark a war.

Iran responded to Soleimani’s killing by launching missiles at U.S. targets in Iraq, although it flagged that the attack was coming and no U.S. soldiers were killed.

In Davos, Saudi Arabia’s Foreign Minister Prince Faisal bin Farhan Al Saud told Reuters the kingdom was open to talks with Tehran and that “many countries” had offered to mediate.

Riyadh has accused its arch-rival of attacking its oil facilities in September 2019, an attack that briefly knocked out half of Saudi’s oil production. Tehran denies any involvement.

“If you look at history, we in this region have managed to weather through worse geopolitical situations, including actual, real wars,” he told Reuters.

“We in Saudi have to focus on the economy and reform … We firmly believe the disputes can only be resolved by dialogue.”

Zarif tweeted on Thursday that Iran remained open for dialogue: “We announce our readiness to participate in any complementary work that is in the interest of the region.”

Iran has said it will not abide by the nuclear deal it signed with six global powers. Washington pulled out of it in 2018 and wants Europe to work on a new, tougher agreement.

German Chancellor Angela Merkel warned in Davos against prematurely scrapping the deal, saying that it would be wrong to abandon something “imperfect” with nothing better in place.

As Davos began on Tuesday, Iran’s semi-official news agency reported that lawmaker Ahmad Hamzeh had announced a $3 million award to “whoever kills Trump”.

And the U.S. special representative for Iran, Brian Hook, said Soleimani’s successor would suffer the same fate if he followed a similar path by targeting Americans.

Pakistan’s Prime Minister Imran Khan said he had told Trump that a war with Iran would be “a disaster for the world”. It is not clear how the U.S. president responded.

As well as wishing for tensions to calm, one Saudi official made clear the weigh of that obligation rest with Iran.

“The escalation is really coming from the Iranian side,” Adel al-Jubeir, Saudi’s minister of state for foreign affairs, told a Davos panel on “The Unsettled Middle East”.

“We can’t deescalate because there’s nothing to deescalate from on our side… It’s up to the Iranians to decide if they want to provoke a reaction from the international community or not.”

The United States on Thursday said it blacklisted two companies based in Hong Kong, one in Shanghai and one in Dubai for helping Iran’s state-owned National Iranian Oil Company (NIOC) export millions of dollars of goods in violation of U.S. sanctions.

The sanctions would freeze all assets held by the companies that fall under U.S. jurisdiction, generally bar U.S. companies and individuals from dealing with them, and potentially subject non-U.S. financial institutions that knowingly facilitate “significant transactions” for them to U.S. sanctions.

The announcements are the latest step in the U.S. “maximum pressure” campaign designed to squeeze the Iranian economy to try to force Iran to accept greater constraints on its nuclear program, regional activities and pursuit of ballistic missiles.

U.S.-Iranian tensions have risen since the U.S. decision to abandon the 2015 Iran nuclear deal, its subsequent re-imposition of U.S. sanctions on the Islamic Republic, attacks on Saudi oil facilities blamed on Iran and the U.S. drone strike that killed Iranian military commander Qassem Soleimani in early January.