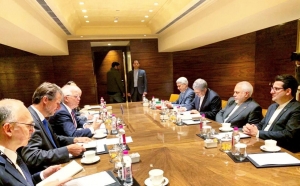 Iran’s Minister of Foreign Affairs Mohammad-Javad Zarif said in a meeting with European Union Minister for Foreign Affairs Josep Borrell that the three European members of Iran Deal should change their behavior towards Iran and the JCPOA.

The meeting took place in New Delhi on the sidelines of the Raisina Dialogue 2020. The three-day Raisina Dialogue 2020 kicked off in the Indian capital on January 14 with participation of 700 representatives and foreign ministers from 100 world countries, including Iran.

This is the first meeting of Zarif and Borrell after Borrell took office. Zarif expressed readiness to work with him closely.

Zarif counted Europe’s mistakes and instances of inactivity about the Joint Comprehensive Plan of Action (JCPOA) and criticized Europe’s behavior towards Iran and the JCPOA.

He added, “It won’t work my friends. You only whet his appetite. Remember your high school bully?”

“If you want to sell your integrity, go ahead. But DO NOT assume high moral/legal ground. YOU DON’T HAVE IT.”