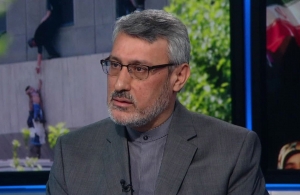 Iran’s Ambassador to London Hamid Baeidinejad rejected British Prime Minister Boris Johnson’s proposal to replace JCPOA with Trump’s deal, saying that until the time JCPOA exists, there is no reason for a new agreement.

In an interview with the UK Channel 4 late on Wednesday, he added that JCPOA still exists and three European states insist on solving disputes through diplomacy.

Noting that Iran’s nuclear steps to reduce compliance with the deal were not meant to kill it, he said that Iran has kept way for diplomacy open, hoping that European parties would understand the turbulent situation in the region and fulfill their commitments.

If the European parties are willing to salvage the deal, they must take actions, he said, reiterating that membership in JCPOA is not possible without remaining committed to it.

Asked about Trump’s deal as a replacement for JCPOA, the ambassador said that the issue is just an idea and its aspects are not clear for anybody.

When there exists an agreement, there is no reason to think about replacement, he said, noting that all should make efforts to fulfill their commitments in line with implementing efficiently.

Describing JCPOA as an international multilateral deal, Baeidinejad said that Iran held talks with the then US officials in the course of nuclear talks and there is no need to do the same with the incumbent White House officials.