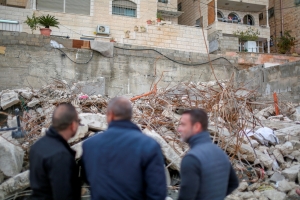 European Union Heads of Mission in Jerusalem and Ramallah on Monday went on a fact-finding mission to Issawiya, a neighborhood in Israeli-occupied East Jerusalem.

The fact-finding mission aimed at hearing from residents and representatives of civil society organizations about unprecedented and continuous incursions and clashes between residents and Israeli police in the neighborhood since May 2019.

The EU Heads of Mission met residents, community representatives and representatives of civil society organizations active in the community who talked about an unprecedented increase in the presence of Israeli security forces since May 2019 in the neighborhood with daily incursions – many of them taking place in the vicinity of schools, according a statement issued by the bloc.

One person was killed on 27 June 2019, and there are estimates that more than 300 have been injured.

“Interlocutors expressed that the raids have resulted in several severe incidents of police brutality and excessive force, including assaults on residents and use of rubber bullets, tear gas, and stun grenades and night raids as well as arrests. They estimated that some 700 people have been arrested (with up to about 30 indictments filed),” the EU statement added.

The EU Heads of Mission were also briefed on the educational situation and the challenges facing Palestinian students in Issawiya.

“The European Union is concerned about the worrying developments and violence in Issawiya. Responsible actors on the ground should show calm and restraint in order to prevent any escalation,” said Acting EU Representative Tomas Niklasson.

“The EU and its Member States support the right to education, and the EU identified the Rights of the Child as a priority area in its EU Human Rights and Democracy Strategy for 2016-2020. Israel has an obligation to protect, respect and fulfill the rights of the child, by ensuring that schools are inviolable safe spaces for children,” he added.

“The EU position on Jerusalem remains unchanged: the legitimate aspirations of both parties must be fulfilled and a way must be found through negotiations to resolve the status of Jerusalem as the future capital of both states,” as stated in the EU statement.