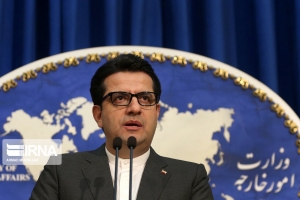 Iran on Monday downgraded Israeli threat of air strikes, warning that any stupid act will cause regretful response from Iran.

Foreign Ministry spokesman Abbas Mousavi said that the Israeli officials’ threats and allegations against Iran indicate their weaknesses, warning that any Israeli stupid act will be dealt with regretful and destructive response.

Mousavi branded Israeli military threat as sign of their weakness aiming to cover up crises and internal problems.

It is of an occupying nature on the Palestinian territories over the past 70 years by aggression, he added.

The Islamic Republic of Iran relying on its power cannot compromise with the occupying entity.

Iran has promoted the culture of resistance to any aggression and will not hesitate to defend national security by relentless response to any stupid act.