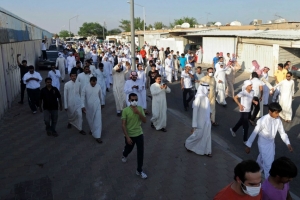 “My country is the one eternal disability that I will never be cured from.” This was the opening sentence to the late author Naser Al Zafiri’s novel “Kaliska,” which tells the story of a bidun, or stateless, man from Kuwait who immigrated to Canada. In March, photos of Zafiri’s casket circulated on Kuwaiti social media – carried on the shoulders of Arab immigrants in Canada, to be laid into a grave of snow. Zafiri was born in Kuwait in 1960, went on to study engineering at Kuwait University, served in the Kuwaiti army, and immigrated to Canada in 2001. At that point, the hope of someday being recognized as a Kuwaiti citizen seemed slim. In Canada, he attained a bachelor’s in English literature, a master’s in linguistics, and perhaps most important – citizenship. He authored a number of novels and literary works with Kuwait’s bidun community and the nature of their struggle as the central theme, as well as what growing up in the Kuwaiti suburb of Jahra was like. Zafiri longed for Jahra and Kuwait so much he said that he had “still not shaken the dust of Jahra off [his] back.” His burial was in the snows of Ottawa, away from all his loved ones. His death stirred strong sentiments among the creative community in Kuwait and shed light on the multidimensional losses and struggles of Kuwait’s bidun community.

“Bidun,” translates to “without” in Arabic, a term that Claire Beaugrand notes in “Stateless in the Gulf,” is used to refer to “a group of people who claim entitlement to the Kuwaiti nationality based on the absence of other state affiliation, while the State of Kuwait considers them ‘illegal residents’ on its territory.” They currently make up approximately 10% of the Kuwaiti population, with their numbers estimated at around 110,000, although there is speculation that the actual number is larger. Present in Kuwait since its creation as a nation state, the state’s attitude and policies toward biduns has significantly deteriorated throughout the years; today, they are perceived as illegal residents who possess foreign passports and falsely claim entitlement to Kuwaiti nationality. They struggle for a number of basic human rights, including the right to hold valid identification documents, own property, and access education, health care, and more.

A number of works about the situation of the biduns authored by Kuwaiti citizens as well as writers from Kuwait’s bidun community have emerged into Kuwait’s contemporary literary scene, with a notable spike since 2011. From the older generation, the late Sulaiman Al Fulaih, the late Ismail Fahd Ismail, Dakheel al-Khalifa, Saadia Mufarreh, Kareem Al Hazzaa, and the late Naser Al Zafiri stand out. Among the younger generation, there have been works by Kuwaitis such as Bothayna Al-Essa, Abdullah Al-Busais, and Saud Alsanousi, as well as from members of the bidun community, such as Khaled Torki, Hanadi Al Shammari, Mona Kareem, and Shahad Al Fadhli. These writers touch on a variety of different themes, situating statelessness in debates on identity and belonging. Their works have been published in Kuwait and across the Arab region, with a number of them translated into other languages. Following Zafiri’s death, Anwar Al Saad, a Kuwaiti scholar who specializes in Arabic literature, began translating Zafiri’s works into English to reach a wider audience and raise awareness on the subject of statelessness in Kuwait. The emergence of so many works, several of which have been censored by the state, suggests that bidun literature may be becoming a distinct subgenre within Kuwaiti literature, and raises the question of what this means for the issue of Kuwait’s bidun community and what its impacts are on the cultural scene.

Khaled Torki, whose novel “Thalatha min Al Shimal” (“Three from the North”) was banned by the Ministry of Information, spoke about his experience as someone whose family members had their citizenship revoked when he was five years old. He attributes the rise of Kuwaiti literature that deals with the subject of citizenship and statelessness to the political events that have occurred in Kuwait since 2011, coupled with the democratization of social media. “Bidun literature is literature that deals with the question of identity and belonging, a perpetual question that we were especially forced to confront. It is a subgenre that has grown to be a key pillar within Kuwaiti literature; it is the central question of our society. The bidun problem is not a problem that is restricted to the 120,000 stateless individuals in this country; it is a problem that concerns 1.5 million citizens.”

Khaled’s novel is a complex web that examines the various dimensions of citizenship and identity through three main characters: one who was formerly bidun, emigrated from and then returned to Kuwait upon receiving citizenship from the foreign country he immigrated to; another who remains bidun, lives in Kuwait, and ponders his prospects for immigration; and the last one who had been stripped of citizenship. Khaled’s desire was to demonstrate the humanity of the bidun population, and by doing so, show the resemblance between them and Kuwaiti citizens. He took issue with other works by Kuwaiti authors who invented bidun characters in a manner that he felt perpetuated stereotypes about questionable belonging, citing one Kuwaiti work in which “the character has no tribe, no family, no roots in Kuwait, and is dark skinned. There are particular agreeable characteristics on what it means to be bidun and that image was not one of them. If the reader learns that the bidun are, too, flesh and blood, share similar lineage and heritage, you learn that you are not different from one another – you are equal in humanity, equal in the rights you should both carry.

The role of cultural platforms in Kuwait has evolved, moving away from the traditional concept of “art for art’s sake” and instead transforming into civil society groups in their own right. Takween bookstore, founded in 2016, has held a number of reading marathons since 2017; participants show up to read a number of pages, and for every 10 pages an individual reads, the marathon’s sponsor donates 1 Kuwaiti dinar. The total amount is then donated toward the tuition fees for underprivileged children ­– the majority bidun. Mohammed Al Attabi, a Takween board member, explained that this form of activism is the minimum that everyone should put in toward “a just, humane cause like that of the bidun cause; it is the responsibility of the intellectual to be involved in the issues of his society.” With increasing numbers of bidun parents turning to Twitter asking for assistance in paying for their children’s tuition fees, activities such as Takween’s are responding to a pressing need, particularly in light of bidun children not having access to government schools and their parents working minimum wage jobs. The Takween reading marathons have been hugely popular and have encountered no legal difficulties. A bidun writer said that, “Takween marathons are magnificent; you read a book in order to help another child learn how to read.”

On the other hand, in March, there was an attempt to organize a “Bidun Cultural Week.” A number of activities with the theme of bidun representation were to take place, including a poetry evening with bidun poets, a lecture analyzing the works of Naser Al Zafiri, a lecture on racism toward biduns by activist Fahad Al Mutairi, and another lecture on the psychological impacts of marginalizing biduns by activist Ebtehal Al Khateeb. Days before these events were to take place, authorities ordered that they shut them down, effectively banning the entire cultural week. While the organizers were obligated to abide by the orders given to them, the Kuwait Lawyers Society provided the organizers with a venue in which to film the activities. The activities took place and were filmed before an empty audience to bring awareness to the ban that prevented these events from taking place in front of an actual audience as originally intended.

Poster advertising an evening of bidun poetry as part of the larger bidun cultural week in Kuwait, which was later banned from taking place.

Poster advertising an evening of bidun poetry as part of the larger Bidun Cultural Week in Kuwait, which was later prevented from taking place in front of a live audience.

The state response toward cultural activities that deal with the subject of biduns has varied; in the case of the Bidun Cultural Week, all “on-the-ground” activities were halted, although online footage posted on social media proved to be a convenient loophole. In the case of the Takween reading marathons, no issues have arisen. When Saud Al Sanousi’s “Bamboo Stalk” was made into a TV series in Ramadan 2016, the Kuwaiti Ministry of Information omitted a scene in which bidun character Ghassan is describing what it means to be stateless in Kuwait. There has been a wider campaign of censorship by the Ministry of Information in the past five years, and cultural productions that address the subject of Kuwait’s stateless population are no exception.

A cartoon depicting a schoolgirl in uniform, labeled “bidun,” crying as she is unable to reach the blocks across her, labeled “education,” by Bader Al Ghaith, a Kuwaiti cartoonist and teacher

A cartoon depicting a schoolgirl in uniform, labeled “bidun,” crying as she is unable to reach the blocks across her, labeled “education,” by Bader Al Ghaith, a Kuwaiti cartoonist and teacher

Still, the presence and prevalence of bidun literature and the rise of bidun literary voices serve as a form of “soft power for instigating change in the long term; it is an affirmation of existence, saying I am here, listen to me” as Mohammed Al Attabi describes it. State censorship certainly poses an obstacle, but the widespread use of social media has allowed for the circulation of literary works and ideas that challenge preconceived notions of identity, citizenship, and belonging in Kuwait. Khaled Torki believes that the circulation of bidun literature contributes to countering dehumanizing state and media narratives around the bidun community, and social media has built bridges that have allowed the fostering of interaction and cultivation of friendships between citizens and biduns in a manner that could not take place in the past.

I Became Muslim Because Of Jesus

I was born with an unshakable inquisitiveness that