Iranian President Hassan Rouhani said on Wednesday that the US Administration must lift sanctions first of all for any diplomatic encounter. 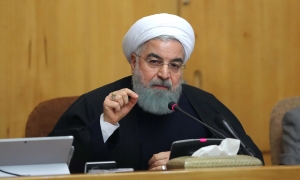 He made the remarks in his speech to the 26th national insurance and development conference at Milad Tower.

He recalled Iran-US diplomatic encounter six years ago when he had a phone contact with former President Barack Obama coming back home from the UN General Assembly meeting in New York saying, “My advisors and the entourage convinced me to answer former US president’s phone call so as to create progress in negotiations.”

Despite the fact that I hesitated but I accepted their suggestion, he added.

“In the last moments that I was leaving New York, the US President called me and I responded.”

Rouhani described his shorts talks with the ex-US president as a strong locomotive for moving negotiations train.

We talked about the framework of negotiations and he mentioned three topics about which we were not ready to negotiate.

“I told him that if you implement the first topic dealing with nuclear issues then we will put on the agenda the second and third ones,” Rouhani said.

The contact helped reach an agreement in Geneva in less than 100 days and sanctions in many fields were lifted, Rouhani said adding that Iran was given $700m monthly from the frozen assets in banks.

The most important achievement of this temporary agreement was Iran’s “right of enrichment”, he noted.

Rouhani said that no one got to believe that we could convince the world six powers that Iran has the right to enrichment.

On the achievement of the Joint Comprehensive Plan of Action, he said that Iran was successful to revoke all the UN resolutions about the sanctions and the resolution involving chapter seven of the UN Charter.

The International lawyers had said that it is not possible for the UN to cancel six resolutions that Iran never implemented them even for one day but it happened and all the UN Resolutions imposing sanctions on Iran were revoked.

He said that the JCPOA had useful impacts on Iran’s economy and that Iran’s economic situation became different and the insurance industry underwent satisfactory development.

Rouhani singled out the Saudi Kingdom and the Israeli Zionist regime as elements influencing the White House, encouraging Trump Administration to withdraw from Iran nuclear deal and impose maximum pressure on Iran.

They had reached a kind of certainty that when they imposed historic sanction on November 4, 2018 Iranian government will not be able to survive, he noted.

We make the situation calm inside the country but Israeli regime, Saudi Arabia and US hardliners deceived Trump, he said, adding that the biggest trick against Trump was related to the JCPOA.

“Iran is a country that faces specific risks, and in the past 41 years, we have been under the pressure of sanctions, especially in the last two years.

“When the 11th government took office, the country was under sanctions backed by the UN and we were allowed to sell only one million barrels of oil that year, which was decreasing by 20% each year.

“The first step the government took was to eliminate this 20% drop in oil sales. This means that during the early stages of the negotiations, it was agreed that Iran’s oil exports must not decrease as a precondition to continuing the negotiation process.

“The second step was that we believed that a higher level of negotiation was needed to resolve this issue, and for the first time after the Revolution, meetings and negotiations between the Iranian Foreign Minister and the US Secretary of State were held in 2013.

“My advisors and the accompanying delegation on the New York visit convinced me that it would be better to take the US President’s phone call for negotiations to proceed, and that was something I doubted, but when all the advisors agreed unanimously, I agreed.

“At the last minute I was in New York, the President of the United States contacted me at the hotel and I answered his phone call and it took about 20 minutes, which was a very powerful locomotive for the negotiation train.

“In that telephone conversation, we outlined the framework of the negotiations and the US President raised three issues for negotiation and I said that we were not ready for negotiation on those issues, but if the first issue, which was the nuclear issue, would work well, then the second and third issues can be on the agenda.

“This led to the Geneva Interim Agreement being reached in less than 100 days, which temporarily lifted sanctions in many areas, including receiving the money the was frozen in American banks by $700 million a month.

The president said that one of the achievements of the Geneva Agreement was that Iran’s right to enrichment was recognized, saying, “This was the most significant achievement in the negotiations in less than 100 days. No one, even government advisors, could believe that we could have the 6 major world powers admit Iran has the right to enrichment in its own country, contrary to what was stated in the UN resolutions”.

He continued, “After the JCPOA was struck, the insurance industry flourished and we were linked to world insurance companies”.

Stressing that Iran “could reach the final agreement in 2014, but it was postponed until 2015 and this was because of the pressures of the Zionists and Saudi Arabia, for which even the Saudi foreign minister and the Zionist Regimes’ prime minister visited Vienna to put off the agreement”, the Iranian President stressed that “Saudi Arabia and the Zionist Regime were the key factors in influencing the US to withdraw from the JCPOA and mounting pressures against Iran”.

He went on to stress that “the Zionist Regime and Saudi Arabia and US hardliners tricked Trump in withdrawing from the deal and impose sanctions on Iran.”

َAccording to www.president.ir, Rouhani continued, “Trump wanted to act like what Reagan did towards the former Soviet Union, but he didn’t know that the Iranian nation, society, culture, young people, entrepreneurs and authorities defend their independence and dignity no matter what.”

“It should be recorded in history that Iran signed an agreement with 6 major world powers, and they violated it, but it was not us who violated it, and we are still living up to it,” he said.

“Americans wanted to transfer the burden that was on its shoulder to Iran. We wanted to foil this plot and tell the entire world that we have no problem with negotiating and meeting”.

He referred to his latest visit to New York and added, “We announced that if the Americans lift all sanctions, we can have a meeting an hour later, because all P5+1 leaders were there, but they wanted the meeting to happen first and then lift the sanctions”.

“I hereby announce that whenever the United States is ready to lift all illegal, unjust and terrorist sanctions, Iran and P5+1 leaders will meet right away, and we have no problem in this regard,” he said.

He added, “Today, we are under sanctions that we are not the one to blame for, but they were imposed because of the Zionists and the regional reactionaries”.

President Rouhani continued, “We have no way except resistance, but we haven’t closed the door of negotiation”