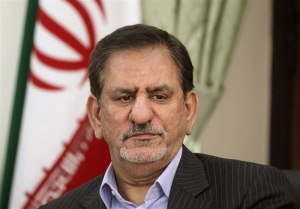 Iran’s first vice-president said on Monday that Iran is selling its oil through different mthods despite the US’ pressure and policy to push the country’s oil sale to zero.

Addressing a ceremony of the 23rd anniversary of the National Day of Export, Eshaq Jahangiri said, “We have stood against the harsh conditions despite all the psychological and economic war of the US on Iran over past two years since the US unilaterally quit the Joint Comprehensive Plan of Action (JCPOA).”

Jahangiri said that the US has focused its maximum pressure on the lives of the people of Iran, but the conditions, though rough, are much better than what Washington wanted, which is the fruit of the efforts of the Iranian producers and exporters.

He added that the Americans, the Saudis, and the Zionists are trying to bring Iran down. And the only way to fight them back is consensus that can change threats to opportunities.

The US withdrew from the 2015 JCPOA that was unanimously confirmed by the United Nations Security Council and was warmly welcomed by almost every state in the world.

Asking if there is any pressure bigger than the one the US and its followers have been imposing on Iran in the past two years, he said that they have sanctioned all the organizations that can be active in the economy.

They have recently said that they are going to sanction Iran under different excuses so that if the atmosphere changed and some sanctions were removed, they would still have everything under control. They have even sanctioned petrochemicals too, he added.